In the first broadcast of season 5 of Shark Tank Vietnam, Jungle Boss Company attracted strong attention from the public when both Shark Hung and Shark Hung Anh withdrew their Golden Tickets and decided to fight each other. It is worth noting that before this golden ticket auction, all three Sharks made a deal (agreement) that reduced the value of the company to more than half of the original valuation and listed the defects of the company. start-ups. That is also part of the reason why founder and company executive Le Luu Dung closed the deal quite hastily.

However, if you look closely, the audience can ask themselves the question of whether this start-up is so attractive for the Sharks to compete with each other?

With a revenue of 23 billion VND and a profit of 5 billion VND in 2019, the characteristics of the niche market, it is difficult to scale up (expand), this is not exactly an ideal business model. However, from an investment perspective, sometimes the unexpected is the most attractive bait for sharks, as in the case of Jungle Boss, the company’s operating license.

The business type of Jungle Boss is very specific and depends a lot on obtaining a tourist exploitation license. This is not an easy thing, but even with money, it is not possible to do it, so Shark Hung Anh no matter how “threatening” it is, it is not necessarily a concern. When the local authorities have accepted the Jungle Boss, it means that it is difficult for a second party to jump in. Not to mention, the founder is a very experienced person with various qualifications in the industry. These are the biggest values ​​​​of start-ups that attract investors.

Not only in Shark Tank, recently, Momo and Finhay have in turn completed the acquisition of shares of decades-old securities companies. Some companies are even recording accumulated losses of up to 260 billion dong. This further affirms how important the company’s related papers are in the eyes of investors, in the context of setting up a new securities company, it is very difficult to get a license at the moment.

Therefore, what startups need to do before raising capital is to understand the value of their own company, thereby developing strengths and gaining more confidence when negotiating.

Criticize, but ask deeply – shows that Shark is interested

In the Shark Tank Vietnam program, many times the Sharks that have just entered have “preemptively criticized” making start-ups more or less confused. But soon they had the complete opposite move, asking very deeply into the issues of the business. If the Sharks are not interested, they will observe more and get out of the tank very quickly. Except in the case of a start-up that publishes shocking business figures that must be verified.

Typically, Anhome’s deal when asked by Shark Hung continuously from the beginning, interspersed with many criticisms such as “this is nothing to research”. However, in the end, Shark Hung decided to fight for a deal with Shark Phu.

Criticizing start-ups (but still asking deeply) can include 2 main reasons, one is the psychological tactics of the Sharks to create an advantage in negotiations, the other is that the start-up really has problems, but it has problems. have other capabilities that Sharks need such as teams, technology or important licenses (mentioned above).

Therefore, start-ups should not falter when being preempted very quickly when negotiating. Having accepted to be a start-up, it is very normal to “get” criticized. As long as the Founder believes in his business, then the company will survive.

The familiar saying that Sharks often close when dealing is: “You have to look at the small part of a big piece of cake, not eat the big part of a small piece of cake”.

So how much is called big?

Most of the Sharks don’t own unicorn businesses like Grab, VNG, Duolingo… Vietnam has fewer billion-dollar businesses like Vingroup, Viettel or Vinamilk… So keeping a small percentage in the big pie How big is it actually? Is it enough to motivate start-ups to continue?

Jack Ma’s 4.8% stake in Alibaba is a huge number, but 30% stake in a business worth 2-3 million dollars is not worth much. Not to mention that the start-up needs a large enough stake to further dilute in the next funding rounds.

So start-ups need to be very alert and set maximum limits for themselves before negotiating. However, there are also many cases where startups need immediate hot capital to survive, so Founders need to consider between solving the company’s immediate problems or holding a percentage of long-term development. If not resolved, even 90% of the shares of a company that do not create value means nothing.

Percentage of consulting shares is… farce

If Shark Phu is famous for making start-ups commit to “work for themselves in case of bankruptcy” in previous seasons, Shark Binh often uses the “advisory percentage share” technique (Advisory Shares) when out deal.

Having determined investment, no one wants to lose their money. Therefore, investors are responsible for making businesses grow up, or in other words, they are increasing the value of their own money. Raising capital is very different from selling company shares to the public. Investors or even investment funds will interfere a lot in the company’s operations to help the company achieve its plans.

As in the case of Coolmate, if Founder Pham Chi Nhu agrees to a 10% share deal without consulting shares, will Shark Binh let the start-up operate on its own? $500,000 is Shark’s real money, Shark has “excess money” and doesn’t want to see this money fly away. Therefore, in addition to financial investment, Shark also has to do everything so that his $ 500,000 can be multiplied by 4 within more than a year. It is also an obligation attached to the rights of the Sharks. In fact, many Sharks actively commit to free consultation support even without investment.

Shark asked for a divestment plan, but when Shark divested, the start-up must be happy

Even on Shark Tank or raising capital, investors often ask start-ups to provide themselves with exit strategies. This is the question that confuses start-ups the most, because Sharks who do not know whether to invest or not have been worried about divestment.

Luxstay’s once-popular $6 million deal is the best example when Shark Dung took the position of standing with the Founder and had a very classy presentation to invite other Sharks to contribute capital. So start-ups must remember, the time when investors divest is the time when the company’s valuation increases, there is nothing to worry about.

Now it’s only me

Investing is not charity. Shark stayed until the end certainly not out of sympathy for the start-up. So, in essence, this is just an act to show the position of the Sharks in the negotiation. Even, in many cases, investors also use techniques to create accents, silence, pause… to create suspense for the communicator. If you look closely at the episodes that have aired on Shark Tank Vietnam, the last remaining Sharks often ask very carefully about the company and the share structure, clearly showing their interest in investing.

So start-ups should stay calm, find ways to cope, avoid being “forced” leading to unfavorable decisions.

Despite owning a fortune of up to thousands of billions of dong, the Sharks are still extremely careful with their “several billion and odd”. Shark’s deal closing is not simply an investment in economic value, but also a game of finding the feeling of winning.

EQ (Emotional Intelligence) – emotional intelligence is one of the most important factors of a Founder. Founders need to understand the psychological characteristics of Sharks so that even if they close a deal, they must make their partners the most excited.

The nature of sharks is to hunt.

5 or 10 billion VND compared to the huge assets of the Sharks is just an odd number counted on the fingers. The most interesting thing about the hunt is to win absolutely, the harder it is to get, the higher the value.

So negotiation is art. Start-ups should not agree to the proposed rate levels too quickly, but must have a pause, think, discuss and negotiate.

This is like paying 200,000 VND for jeans with a list price of 500,000 VND. If the seller immediately agrees, even though we can buy the jeans as expected, the seller’s nod immediately can still make the buyer “hurt”, the price we only pay 150,000 VND .

Start-ups often make this mistake like Sadu recently said: “With that much money, even Shark wants 50% of me to play”. Or like many other start-ups that have a very high self-value but rush to agree to the deal when the Sharks offer a deal that is many times lower. 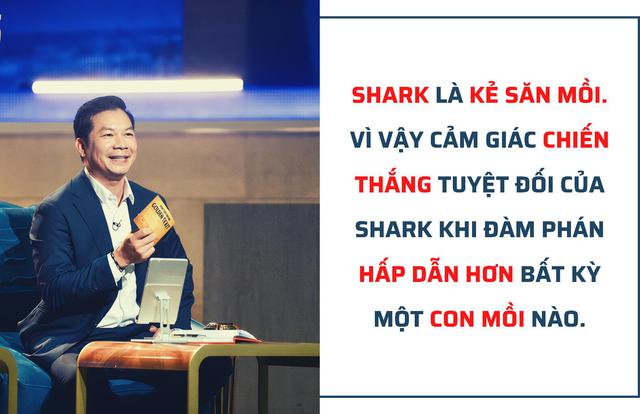 Founders should learn from Sharks in this subtlety and emotional intelligence (EQ). Immediately after closing the deal with Sadu, Shark Hung immediately thanked Shark Lien “for giving me up”, despite the fact that founder Phan Trung Kien actively chose Shark Hung. Or like right after fighting for the golden ticket with Shark Hung Anh, Shark Hung made a move to invite Shark Hung Anh to join.

Whether or not they can raise capital, certainly founders and start-ups learn a lot of essential things in the process of negotiating with Sharks. And like any other information channel, in order to learn value, the learners themselves must actively observe, reason and analyze. Whether Shark Tank is a game show or an actual academic channel completely depends on the viewer’s approach.