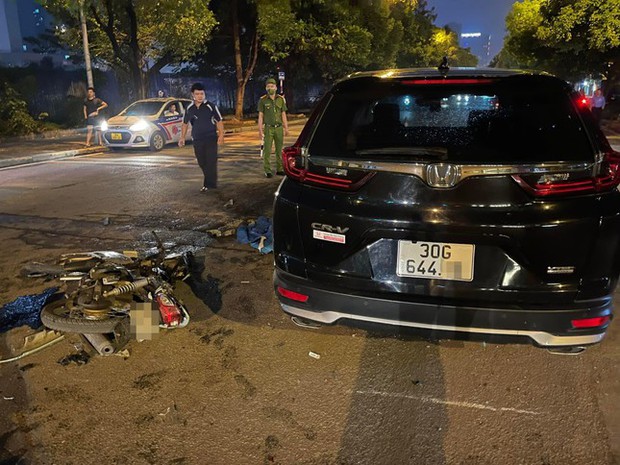 The scene of the accident.

Before that, at about 21:30, Trinh Van Phuong (born in 1981, residing in Cau Giay, Hanoi) was driving a car BKS 30F-811.XX on Nguyen Chanh Street. When coming to the intersection of Nguyen Chanh – Tu Mo (Trung Hoa, Cau Giay), the car collided with 2 motorbikes on the road.

However, after the accident, the driver did not stop but increased the throttle to run away, dragging a motorbike under the vehicle, sparking fire. At the intersection of Nguyen Chanh, intersection with lane 27, Mr. Phuong’s car continued to collide with the car 30G-644.XX and then moved a further distance to stop.

Some people witnessed the incident when the car caused the accident to run away and chased the driver to ask him to stop.

It is known that Mr. Phuong, a native of Bac Ninh, currently resides in Hanoi and is a lecturer at a university in Hanoi.

Initially, the incident left two people injured. At the scene, the vehicles were badly damaged, the BKS 30G car deployed the airbag, the BKS 31F car broke the front wheel.

Officers were present at the scene to divert traffic and investigate the incident.