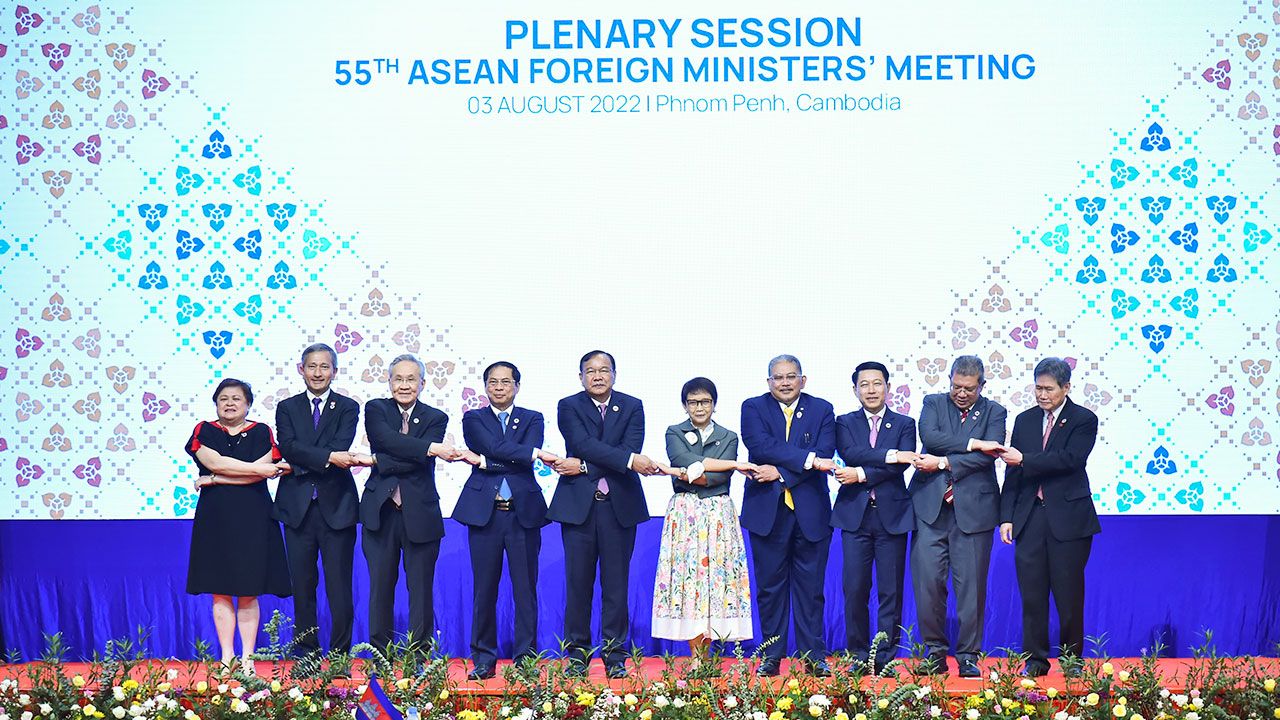 The declaration called for maximum restraint, adherence to the principles of the United Nations Charter and the Treaty of Amity and Cooperation in Southeast Asia (TAC). ASEAN countries reaffirmed their support for the One China policy; upholding the importance of cooperation, peaceful coexistence and healthy competition for the sake of peace, security, stability, inclusive and sustainable development.

The AMM-55 conference series and related conferences are taking place from July 29 to August 5 in Phnom Penh, Cambodia.

On the morning of August 4, Foreign Minister Bui Thanh Son led the Vietnamese delegation to attend the ASEAN+1 and ASEAN+3 Foreign Ministers’ Meetings (with China, Korea, and Japan).

On the afternoon of August 4, Foreign Minister Bui Thanh Son and ASEAN ministers met with the US, India, Australia, Canada, New Zealand, the European Union and the Russian Federation.

Minister Bui Thanh Son and ASEAN ministers and partners spent a lot of time reviewing cooperation progress, agreeing on future orientations and exchanging views on regional and international situations. ASEAN proposes partners to maximize the advantages brought by strategic and comprehensive partnerships, cooperate with ASEAN to build a community, and strive for common peace, stability and prosperity. .

The countries proposed many extensive and diverse cooperation measures to assist ASEAN in building a community, accelerating recovery, and moving towards sustainable development. Among these initiatives emerge strategic, long-term contents such as trade exchange, inter-regional connectivity, narrowing the gap, innovation, digital transformation, energy, climate change response. At the same time, the countries mentioned measures that have been and are being implemented such as cooperation in health, maritime security, counter-terrorism, transnational crime, and cyber security.

Sharing about regional and international issues, the countries expressed concern about the complicated situation. Minister Bui Thanh Son and ASEAN once again affirmed their consistent stance on issues of the East Sea, Myanmar, Ukraine, the Korean Peninsula, tensions between major countries, etc. ASEAN reaffirmed its stance and called for the parties uphold international law, the Charter of the United Nations, the United Nations Convention on the Law of the Sea 1982 (UNCLOS 1982) and the TAC. Countries and concerned parties need to maintain dialogue, build trust, take peace as the goal, cooperate as a tool, respect the rule of law, exercise restraint, and avoid allowing disagreements and contradictions to turn into conflicts. . ASEAN also shared with partners its activities to implement the 5-point consensus on Myanmar, the progress of developing the COC Code of Conduct towards building the East Sea into a sea of ​​peace, stability, cooperation and development. develop.

During the meeting with foreign ministers of other countries on the sidelines of the conferences, Minister Bui Thanh Son discussed ways to promote cooperation with each country. The Ministers all highly appreciated Vietnam’s role in the region, affirming their desire to expand cooperation with Vietnam; proposed a number of measures such as exchange of delegations, strengthening of economic – trade relations, restoration of people-to-people exchanges. The countries emphasized a number of areas of cooperation such as finance, green economy, circular economy, climate change response, support for small and medium enterprises, etc. The parties also discussed more about coordination at conferences. this time.

Talking with State Councilor, Chinese Foreign Minister Wang Yi, the two ministers affirmed the importance of consolidating the traditional friendship and comprehensive cooperation between Vietnam and China; agreed to strengthen cooperation in all aspects and political trust, including high-level exchanges and contacts at all levels, sectors and localities; remove obstacles in trade, deal with epidemics; connecting road and railway; people exchange. Minister Bui Thanh Son affirmed that Vietnam persistently implements the “One China” policy, and together with ASEAN countries call on relevant parties to exercise restraint, avoid complicating the situation, escalate tensions, and deal with disputes. worthy of disagreement, for peace and stability in the region and in the world.

Meeting with Indian Foreign Minister Jaishanka, Minister Bui Thanh Son proposed to promote cooperation in the Greater Mekong Subregion. The two sides agreed to prioritize the sustainable management of water resources, response to climate change, and cooperation between the Mekong River Commission and the National Agency for the River Ganges.