Trailer of episode 22 of the movie Happy Garage revealing the scene where Khai (Bao Anh) jumped into the stream to rescue him when he heard the screams of Son Ca (Quynh Kool) and his sister. Son Ca was bitten on the leg by a snake and Khai immediately used his mouth to suck the poison out.

This is considered a romantic detail that helps Khai score points in Son Ca’s eyes. Many people predict, the feelings of the two are rekindled from this situation. However, the act of sucking blood from the snake bite wound of the character Khai is controversial. 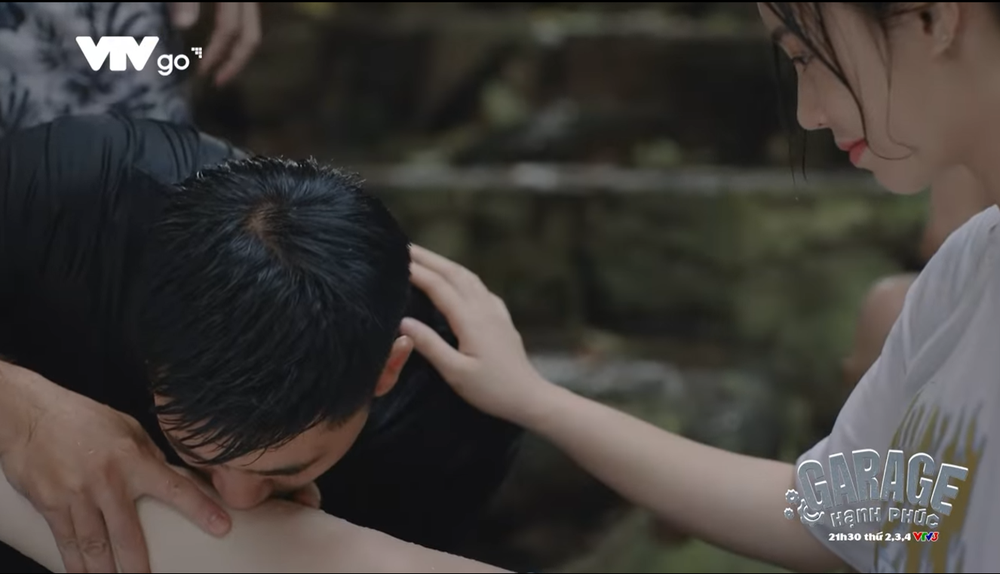 The majority of the audience thought that sucking blood from a snake bite was unscientific. Usually, if you are bitten by a venomous snake, you should immediately call emergency services at the nearest medical facility.

While waiting for medical help, the person performing first aid should follow steps such as: Move the victim away from the snake’s range, reassure the person bitten by the snake, keep calm, limit Restrict movement, immobilize the bitten leg with a splint, to slow the spread of venom, remove jewelry and loosen clothing to prevent compression and swelling of the wound, position the affected area snakebite lying below the heart, even while being transported to the hospital, clean the wound with soap and saline, and use a clean, dry gauze to cover the bitten area.

Therefore, the fact that the character Khai sucks blood from the snake bite for Son Ca is criticized, especially in the drama that is airing in the prime time frame of VTV.

“First aid for a snake bite that sucks blood from the wound is the wrong way. Hope the film crew should learn about medicine before building the situation”, “Another absurd, surreal detail on Vietnamese films. It is extremely dangerous if people without knowledge learn this way”, “Golden hour movies teach first aid for snakebites like that, where will the consequences go”, “Romantic but unscientific episode , “Character Khai scored with Son Ca but the crew lost points with the audience”… was one of the comments on the film’s Fanpage.

Happy Garage increasingly less attractive due to rambling content, lengthy and lengthy details. The characters in the film are constantly placed in ironic and deadlocked situations. Son Ca – the main character in the film has not had a peaceful and happy day. Born in difficult circumstances, his father was an addict, his mother left, Son Ca lived with his grandfather and made a living on his own.

When his grandfather was hospitalized, it was also when Son Ca discovered that he was betrayed in love. Painful, but Son Ca still tried his best to resist. Not stopping there, one fine day, Son Ca’s alcoholic father suddenly returned to ask to sell his house to pay off his debt.

Unfortunate and continuous misfortune made Son Ca become pitiful in the eyes of the audience. Not only with Son Ca, the couple Khai – Van also from the beginning to the end of the film have to live in fear and revenge of old Phi (Admiral Artist Ta Minh Thao).

Even the funny character in the movie like Trung Trau (Duy Hung) was also suddenly placed in a difficult situation when his biological mother committed suicide because of his father’s adultery.

According to audience comments, the title Happy Garage no longer suitable. Expected to have a happy ending in the last episode, but the model is old and becomes a cliché. The film’s abuse of drama, tragedy after tragedy does not create attraction, on the contrary, it causes inhibition and frustration.

September 14, the movie Happy Garage Closed after 4 months of filming. The series is expected to have 24 episodes and end on September 28.