There are 5 oceans on the Earth’s surface: the Atlantic Ocean, the Pacific Ocean, the Indian Ocean, the Arctic Ocean, and the Southern Ocean. An international team of scientists has now found evidence of significant amounts of water between the Earth’s upper and lower mantle.

According to an international study, scientists have discovered a body of water three times the volume of all the oceans on Earth’s surface combined. However, instead of existing on the planet’s surface, this water was found between the transition zones of the upper and lower mantle of the Earth.

WHERE IS ‘FRIDAY OCEAN’?

Evidence indicates that water is in the transition zone (TZ), the boundary layer separating the Earth’s upper mantle and the Earth’s lower mantle. This boundary lies at depths between 410 and 660 km, where extreme pressures of up to 23,000 bar cause the olive-green mineral olivine to alter its crystal structure.

The study confirmed something that for a long time was only a theory, that ocean water accompanies the extra rocks and thus enters the transition zone. This means that the water cycle on our planet includes the interior of the Earth. The transition zone between the upper (brown) and lower (orange) mantle of the Earth is thought to contain a significant amount of water, bound in the rock. Photo: Worldatlas

Professor Frank Brenker from the Institute of Geosciences at Goethe University in Frankfurt, Germany explains: “These mineral transformations greatly impede rock movement in the mantle. For example, mantle plumes – are the rise of an unusually hot rock within the mantle – sometimes stopping just below the transition zone.The movement of mass in the opposite direction also comes to a standstill. importance of subduction zones) often have difficulty disrupting the entire transition zone. So there’s a whole graveyard of such subslates in this area below Europe.”

However, until now it was not known what the long-term effects of “sucking” material into the transition zone on its geochemical composition and whether larger amounts of water would exist there.

The current conditions would certainly favor that. The dense wadsleyite and ringwoodite minerals can (unlike olivine at lower depths) store large amounts of water – so large in fact that the transition zone could theoretically absorb six times as much water. amount of water in all of our oceans.

“So we know that the transition zone (TZ) has a very large capacity to store water. However, we don’t know if it actually does so,” said Prof Brenker.

DIFFERENT OCCASION IN THE SURFACE

Evidence of a ‘sixth ocean’ was found during the analysis of a rare diamond that formed 660 km above the Earth’s surface.

After studying a rare diamond, found in Botswana, Africa – this diamond formed at a depth of 660 km, right between the transition zone (TZ) and the lower mantle of the Earth, where ringwoodite is common mineral – scientists have found large amounts of ringwoodite – which has a high water content – around the diamond.

Diamonds from this region are very rare, even among the ultra-deep-sourced rare ones, making up only 1% of diamonds. Furthermore, the team was able to determine the chemical composition of the rare diamond. It is nearly identical to every fragment of mantle rock found in basalt anywhere in the world. This shows that the diamond definitely came from the Earth’s mantle. 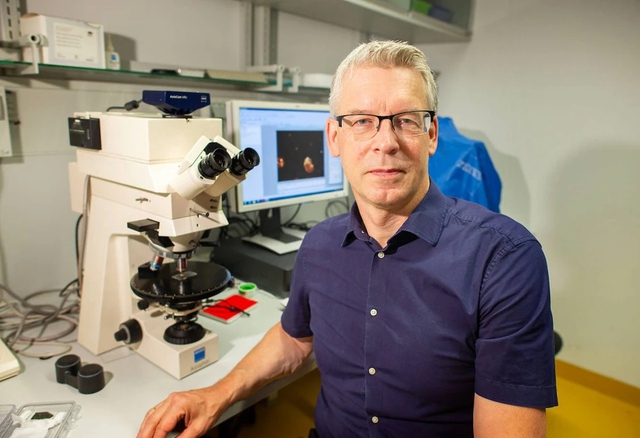 “The impurities in the 1.5 cm diamond are large enough to allow precise chemical composition determination. In this study, we demonstrated that the transition region is not a dry sponge, but rather a dry sponge. contains a significant amount of water, which also brings us one step closer to the idea of ​​French writer Jules Verne [tác giả hai tác phẩm nổi tiếng “Hành trình vào tâm Trái Đất” (1864), “Hai vạn dặm dưới biển” (1870)] about an ocean inside the Earth. The difference is there’s no ocean of liquid water down there, but hydrated rock.” – Professor Brenker shared.

The team explains that the high water content of the transition zone has far-reaching consequences for the dynamics of the Earth’s interior, and if it breaks down, it could lead to mass motions in the crust.