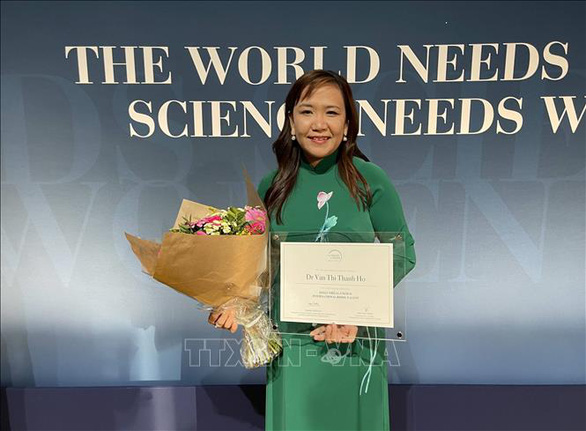 On June 22, at the headquarters of the United Nations Scientific, Educational and Cultural Organization (UNESCO) in Paris, the UNESCO Jury Council and the L’Oréal Foundation presented the Young Talented Female Scientist Award at the United Nations Educational, Scientific and Cultural Organization (UNESCO) headquarters in Paris. World Talent 2022 for Dr. Ho Thi Thanh Van, majoring in chemistry from the University of Natural Resources and Environment, Ho Chi Minh City.

This is a prestigious award within the framework of the program For the development of women in science, initiated by the L’Oréal Foundation and UNESCO.

Implemented since 2000 to support and encourage female scientific researchers to pursue their careers, this year’s awards are presented to 15 promising female researchers selected from among 250 young talent profiles from national and regional programs for the development of women in science. The prize is 15,000 euros ($15,840), along with female leadership training programs.

The project aims to approach issues of energy and environment, establish a clean cycle, which focuses on hydrogen energy and clean fuels applied in daily life, creating a green, clean energy. , durable, renewable and environmentally friendly.

Sharing with reporters when receiving the award, Dr. Van said that in order to achieve this success, she had received a lot of support and companionship from her colleagues in the research group, family, agencies and both UNESCO and the L’Oreal Foundation – who have created opportunities, encouraged and encouraged female scientists like her to contribute to science.

For her, this award is a great honor, a pride not only for her personally but also for the team of young female intellectuals doing scientific research and for the country of Vietnam.

She hopes that there will be many female friends pursuing a career in science which, in her opinion, has many obstacles, but with passion and a little self-sacrifice, female scientists will be able to overcome the obstacles to achieve their goals. successful, thereby contributing much to the community, to the science of Vietnam in particular and the world in general.

Ambassador Le Thi Hong Van, Chief Representative of the Vietnamese Delegation to UNESCO, Emphasizing that Dr. Ho Thi Thanh Van’s award this time is the pride of Vietnam and the country’s female scientists, demonstrating the role and contribution of our country in the fields of natural and scientific sciences. application, which is internationally appreciated and honored…

Since 1998, the L’Oréal Foundation and UNESCO have annually honored 5 outstanding female scientists from 5 continents around the world, with pioneering research in science in all fields in order to make full use of the world. women’s intelligence, creativity and passion.

In 2000, the L’Oréal Foundation and UNESCO added the category of the L’Oréal-UNESCO International Rising Talent Award to support and encourage 15 promising young female scientists each year. .

TTO – Asian Scientist Magazine (Singapore) has just published a list of 100 scientists with achievements in research on pressing issues of climate change, the COVID-19 pandemic, achievements in scientific discovery or leader in that field.