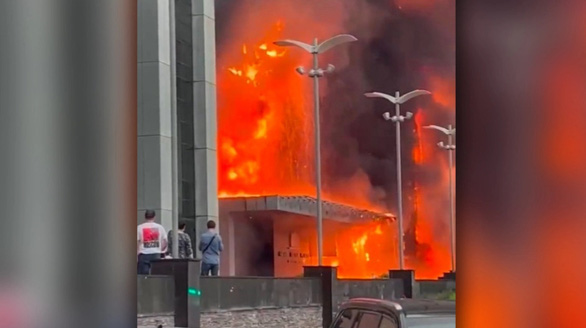 “There could be up to 20 people still inside the sixth and seventh floors of the building. One person is trapped on the seventh floor. The rest may be on the sixth floor,” said an Emergencies Ministry official. Russia said.

“According to initial information, more than 120 people have been evacuated from the burning building,” Russia’s Emergencies Ministry announced. The ministry added that it was continuing to search for people still trapped inside the building, according to AFP news agency.

The additional information kit has 180 people and 41 fire equipment fighting the blaze.

Fire brigade said the cause of the fire was an electrical short circuit while installing the lights outside the building improperly, according to Tass News Agency (Russia).

According to the Ministry of Emergencies, there are currently no reports of casualties in the fire. The fire affected the first four floors of the mall. The fire has spread to areas with a total area of ​​​​1,000 m2.

Russian Emergencies Minister Alexander Kurenkov and his deputy Ilya Denisov were at the scene of the fire.

According to newly updated information by Tass news agency, a spokesman for the Russian Emergencies Ministry said that two people were injured, 120 people were evacuated and 11 people were rescued with specialized equipment in the fire. Grand Setun Plaza center.

The ministry also sent 340 firefighters and 100 fire fighting equipment, including three helicopters to the scene of the fire. The fire was declared as level 5, which is the highest level of the 5 fire levels in Russia. According to the Russian Emergencies Ministry, the fire is under control.