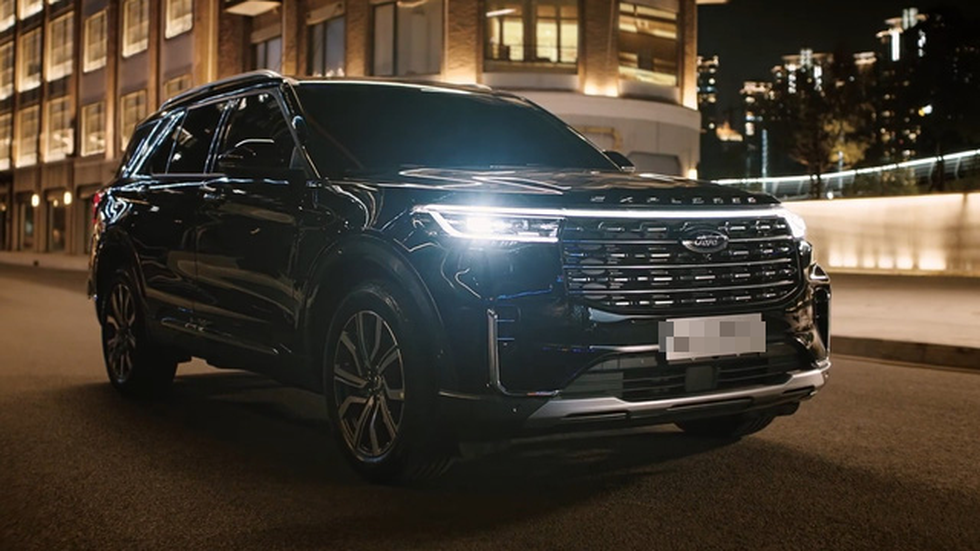 Ford Explorer 2023 is officially present in China with many notable upgrades – Photo: Carscoops

The first images of the Ford Explorer 2023 appeared in February 2021 through the website of the Ministry of Industry and Technology of China.

Up to now, Ford has officially introduced the top SUV model online.

NThe reason is said to be because the Beijing Auto Show has been postponed and has not yet scheduled a return. If canceled, Ford’s SUV will make an official appearance at the Chengdu Auto Show at the end of August.

The Ford Explorer 2023 retains part of the DNA of previous generations, but the grille has been significantly larger, the side air intakes are thinner and the new LED headlights are connected via an LED strip.

On the bonnet also has the words Explorer. Set of 21-inch alloy wheels with turbine design.

The front is more impressive than the old version – Photo: Carscoops

The rear end is also tweaked, with new LED taillights placed horizontally, in the middle is a long chrome. The revised rear bumper is more prominent with dual exhaust pipes. The prominent Explorer inscription on the trunk door replaces the Ford badge that was once used.

The style of the bumper and grille will change depending on the version. In particular, the ST-Line version has the sportiest look.

Due to the redesigned front and rear, the Ford Explorer 2023 is slightly longer than before, measuring 5,063 mm.

The rear of the car is also redesigned to be more eye-catching – Photo: Carscoops

The biggest change is in the cabin. The dashboard has been overhauled with inspiration from “a high-tech cockpit on a yacht”.

The huge 27-inch infotainment touchscreen is arranged horizontally, replacing the vertical form on the US version of Ford Explorer. Thanks to this screen, the physical buttons also almost disappeared.

But most notable is the interior of the cabin. Online viewing may look smaller than Mondeo and Evos, but that may be due to the extra width that creates that feeling – Photo: Carcoops

Below that is a new gear lever, slimmer vents and a higher center console, while creating a more upscale atmosphere thanks to the lighting system and leather seats.

A 10-speed automatic transmission sends power to the rear wheels or all four wheels through an intelligent AWD system. Ford did not specify whether there will be any updates on the CD6 platform, which is shared with the Lincoln Aviator.

The engine and transmission remain the same – Photo: Carscoops

Ford Explorer 2023, made in China by Changan Ford, is expected to hit the market in the coming months.

It’s not really clear if Ford will bring these upgrades to other markets. But page Ford Authority says these features are only available for the 2023 Ford Explorer in China, while in the US it is mostly unchanged. If this is true, it is also difficult to expect big changes in other markets like Vietnam.

While the change is noticeable, it’s unlikely that other markets will receive the same update. Expected, Ford Explorer 2023 for the Chinese market will start production from November – Photo: Carscoops