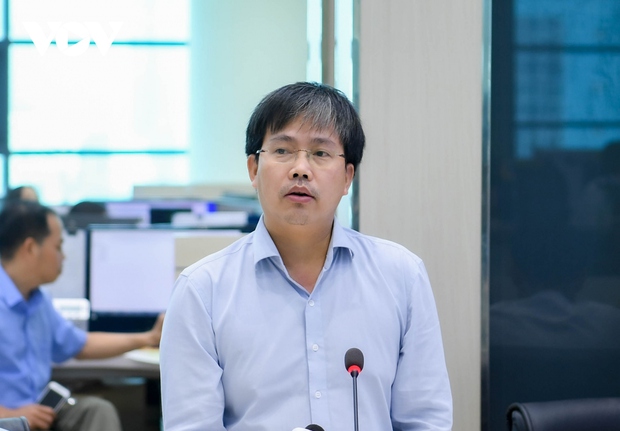 “In response to this very strong storm, the Government and relevant ministries have closely directed. Forecasting has been implemented very early and concentrated to the highest degree. We send people on duty 24/24h, when the storm approaches and lands on the mainland, 100% of the troops are mobilized to respond to promptly make judgments as well as coordinate with relevant agencies for timely information. It’s time to the people,” shared Mr. Mai Van Khiem.

According to Mr. Mai Van Khiem, right from September 23, when the storm was still off the coast of the Philippines, the National Center for Hydro-Meteorological Forecasting had sent an early warning letter to the National Steering Committee for Natural Disaster Prevention and Control. There is a fairly detailed assessment of the potential impact of typhoon No. 4 on the sea areas. On September 26, when the storm had just entered the East Sea, the Center issued an emergency storm news, along with hourly forecast information on the intensity and direction of the storm No. 4. In total, the Forecast Center released 33 official bulletins, 44 additional quick bulletins to serve the direction, operation and response to storms.

Mr. Khiem also said that although the path of the storm No. 4 is not too complicated, it mainly moves in the West, the speed is fast and basically stable, but the biggest difficulty in forecasting the No. 4 storm. is the intensity forecast.

“Not only Vietnam but all countries around the world face this difficulty. As for typhoon No. 4, forecast centers around the world have a consensus on the direction and speed of movement, but the intensity of the storm has a very large “warping”. Vietnam is the country that gives the most realistic forecast of the storm’s strengthening in the East Sea and weakening before reaching the shore. Although the international forecasting agencies give the assessment that the storm is very strong when it comes to the shore, there are water forecasted to be super typhoon. But with the radar monitoring system along the coast, the Vietnamese forecasting agency has provided analysis and forecast intensity when approaching the most realistic shore, “said Khiem.

According to statistics when forecasting typhoon No. 4, the international storm forecasting centers of the US, China and Hong Kong (China) forecast at sea the intensity of strong storms at level 17, shock above level 17; when landing a strong storm of level 16, shock above level 17. Japan predicts when a strong storm of level 15 will land. It can be seen that the forecasts of the US, Beijing, and Hong Kong always give warnings of stronger storms No. 4 Vietnam from 2-3 levels.

“The difference in the forecast of digital storm intensity comes from different countries’ calculation and timing of strong winds. For the US, they calculate the strong wind strength within 1 minute, while Vietnam calculates the strong wind in 2 minutes, so there is a difference. In addition, the model systems of forecasting centers in the world are also different, often the forecasting model for the East Sea region of other countries is a global model with low resolution. Vietnam currently operates a system of high-resolution regional models with assimilation of Vietnam’s data and a system of 32 regional models for the East Sea and the Vietnamese mainland. The forecasting sessions of the system of 32 regional forecasting models this time have helped Vietnam’s Forecast Center to evaluate more closely than other countries in forecasting the intensity and evolution of typhoon No. Mr. Mai Van Khiem emphasized.

Thorough analysis to announce the most appropriate disaster level

According to Mr. Mai Van Khiem, the forecast of a combination of 32 regional models has helped the Center realize that there are a number of factors that make typhoon No. 4 possible to reach super typhoon intensity. “However, after careful evaluation and analysis, we determined that this option is not likely to happen. The option with a higher probability is that the intensity of typhoon No. 4 can reach a maximum level of 14-15 when in the East Sea, this is the option that the Forecast Center has given in the official bulletins.

In order to provide the level of disaster risk in the forecast bulletins, the National Center for Hydrometeorological Forecasting has a very strict process of analysis, assessment and forecast. In particular, this unit strictly complies with Decree No. 160 and Decision 18, identifying 5 levels of disaster risk that will be associated with the responsibility to respond to each level.

At the meeting to assess the situation and overcome the damage caused by typhoon No. 4, Prime Minister Pham Minh Chinh praised, praised and thanked the participation of the whole political system, the drastic leadership and direction. , synchronization of the Party committees and local authorities, the active and proactive participation of the meteorological and hydrological agencies, the army, the police, the press and the media in the prevention of the digital storm. 4. Thereby, minimizing the damage to people and property of the people and the State.