Chinese Foreign Minister Wang Yi left the reception for the foreign ministers of ASEAN and partner countries on the evening of August 4, just a few minutes after arriving – Photo: REUTERS

The meeting that took place on the morning of August 5 in Phnom Penh (Cambodia) was overshadowed by new tensions arising between China and the US after the visit to Taiwan by US House Speaker Nancy Pelosi.

During the EAS plenary session, US Secretary of State Antony Blinken criticized China, describing China’s drills around the island of Taiwan as a “blatant provocation”. The drills, which started from noon on August 4 to August 7, took place after Ms. Pelosi left Taiwan.

A source present in the EAS meeting room revealed that Chinese Foreign Minister Wang Yi and Russian Foreign Minister Sergey Lavrov got up and left when their Japanese counterpart Hayashi Yoshimasa spoke.

Mr. Wang had previously canceled a meeting with Mr. Hayashi Yoshimasa scheduled for August 4, citing Tokyo and other G7 countries condemning Beijing for destabilizing because of its drills around the island of Taiwan.

According to a statement issued by the Vietnamese Ministry of Foreign Affairs on the afternoon of August 5, in addition to the Taiwan Strait issue, the EAS foreign ministers also shared concerns about other complicated developments such as the East Sea, Myanmar, the Korean peninsula, and the South China Sea. Ukraine…

Speaking at the conference, bVietnamese Minister of Foreign Affairs Bui Thanh Son called on countries to contribute to building the East Sea into a sea of ​​peace and stability, safety and security, openness and freedom.

Mr. Son emphasized that all disputes should be resolved by peaceful means based on international law, including the United Nations Convention on the Law of the Sea (UNCLOS).UNCLOS) in 1982.

Facing recent developments in the region, Minister Son reiterated the stances of ASEAN and Vietnam, supporting the “One China” policy and calling on all parties to exercise restraint, avoid complicating the situation, and resolve any disputes. peaceful disputes and compliance with international law. 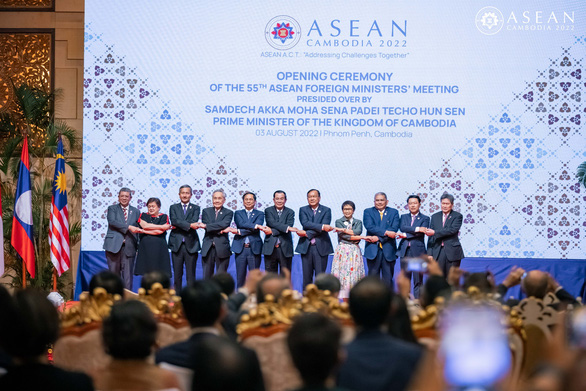 In a joint statement issued on August 5, two days after the 55th ASEAN Foreign Ministers Meeting (AMM) took place in Phnom Penh, Cambodia, ASEAN foreign ministers expressed their deep disappointment at the slow progress in the implementation of the Five-Point Consensus in Myanmar.

The 5-point consensus was reached in April 2021, after a meeting between the head of Myanmar’s military junta and ASEAN leaders. The text calls for an immediate end to inter-party violence in Myanmar, and promotes dialogue between the junta and its opponents.

Speaking at the opening of the 55th AMM, Cambodian Prime Minister Hun Sen, who is also the rotating chair of ASEAN 2022, acknowledged that countries are “deeply disappointed and worried” by the executions of those who do not support the government. military power in Myanmar recently.

“If more prisoners are executed, we will be forced to rethink our role in the five-point consensus between ASEAN and Myanmar,” Hun Sen warned.

The Taiwan issue did not appear in the joint communique.