Recently, people in Vinh Cuu district, Dong Nai province have had a lot of excitement about a video recording the image of a 12-year-old boy driving a ferry to bring passengers and vehicles across the Dong Nai River at Tri An – Hieu Liem Ferry Terminal. . In the opinion of many readers, this has created a lot of confusion and worries about the safety of passengers traveling on this river route. Regarding this incident, the reporter of the online newspaper VTV News was directly present in the locality to verify.

Pham Van Than, the owner of the passenger ferry in the video, said the incident that people reported was real. Accordingly, during the absence of guests, the vehicle’s righteousness (who is Mr. Than’s son) accidentally let his nephew T. (12 years old) take the steering wheel for a test drive. Mr. Than also admitted that the actions of the public were negligent and irresponsible, endangering waterway traffic safety. Mr. Than would like to learn from experience. 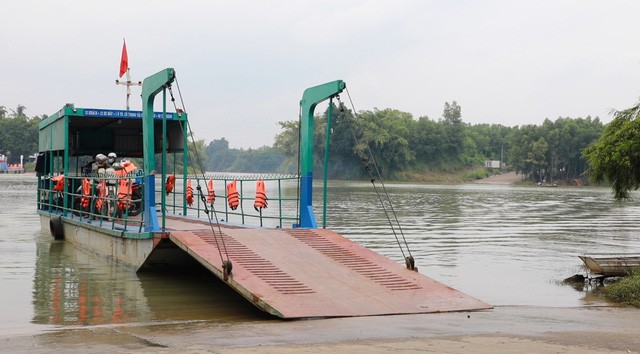 Mr. Le Quang Hien – Head of Economic Infrastructure Department of Vinh Cuu district, Dong Nai province said that the process of exploiting ferry terminals and river crossing passenger terminals requires the operator to have a practicing certificate. If you are old enough, do not meet the regulations to board a ferry is a violation of the law.

Previously, in March and April 2022, Vinh Cuu District Economic and Infrastructure Department chaired and coordinated with District Department of Natural Resources and Environment, Traffic Inspector Team No. inspect and handle the operation of inland waterway ports and wharves dealing in construction materials and river-crossing passenger wharves in the district.

Notably, the reporter of the online newspaper VTV News also recorded a similar situation on the Hieu Liem – Binh Duong ferry route when a boy about 14-15 years old operated the ferry to bring passengers and vehicles across the river on this waterway. .

Contacted and interviewed Mr. Nguyen Cong Dang – Deputy Chief Inspector of Dong Nai Department of Transport, he said that the Department Inspector would advise the Department’s Board of Directors, set up an inspection team, examine and strictly handle cases. children are not old enough, not qualified to operate passenger ships and vehicles across the river. For the recent case, the Department Inspector also proposed to withdraw the operation license for the vehicle owner.

The current Hieu Liem – Tri An – Binh Duong ferry route, in addition to connecting some communes of Vinh Cuu district, also has ferries from Hieu Liem commune, Vinh Cuu district to Bac Tan Uyen district, Binh Duong province. Therefore, the traffic of people and vehicles is crowded, the situation of waterway traffic in this area is also quite complicated due to the deep Dong Nai river bed and fast-flowing water, potentially causing many accidents.