The lunch menu on September 19 at Ngo Si Kien Primary School includes white rice, salty food, soup and stir-fried morning glory. Some parents said that many students reflected that water spinach had a different smell than usual, like cigarettes.

“As soon as the incident happened, the parents quickly reported to the class and school. Fortunately, the children only had vomiting, mild diarrhea, and did not need to be hospitalized. The smell of water spinach has a strange smell, possibly due to the remnants of pesticides. one parent said. 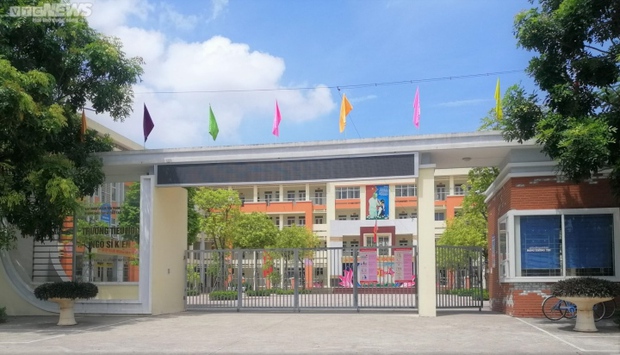 Ngo Si Kien Primary School where students discovered that water spinach in the meal on September 19 had a different smell than usual, similar to the smell of cigarettes.

On September 22, Thanh Tri District People’s Committee had a written response to this information. The document signed by Mr. Nguyen Van Hung, Vice Chairman of Thanh Tri District People’s Committee, said that the district has received feedback from parents and has directed professional agencies, the steering committee of food safety and hygiene, and the school. and the parent representative board involved.

“According to the report of the kitchen staff, when preparing stir-fried morning glory with common seasoning and ‘beef stir-fry’, check the cooking oil and seasoning at the kitchen, all stored in a sealed storage box. expiry date, not moldy, imported water spinach has a clear origin, has an invoice and a sales contract. mentioned text.

According to information from Thanh Tri District People’s Committee, the health of students at Ngo Si Kien Primary School from September 19 to now has not been abnormal, no one has to go to a medical facility or undergo medical intervention. The teacher’s activities are still completely normal. Thanh Tri District People’s Committee has not yet received applications, letters of feedback and complaints from parents of students related to the above content.