The battery is the main factor that makes the price of electric cars higher than gasoline cars in the current segment – Photo: GM

According to reference data from Renault, electric vehicle batteries are in the category of lithium-ion (the most common type today) with a lifespan of 10-15 years. After the above period, the storage capacity of the electric battery is only about 75% of the original – not enough to serve the needs of large and frequent use like a car, but still good enough to serve many other lighter items. 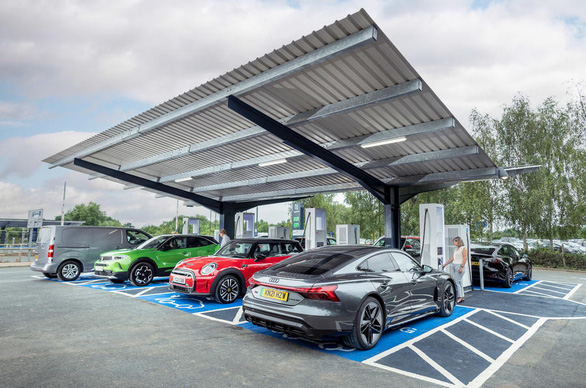 The battery is experimentally used as a backup source for sustainable charging stations that use both alternative electricity such as solar power obtained from the solar panel above – Photo: Autocar

For example, Audi is experimenting with using old electric vehicle batteries (which they have been testing for years) as a tuk-tuk battery, or as a storage source for their charging stations, or more broadly. is the local power grid, there is always a stable power source in case of an incident. In Japan, Nissan is using old electric batteries to power street lights.

In contrast, rare metals are in dire need of reuse because they are both expensive and hard to find, at least in the near future. Currently, many car manufacturers are looking for ways to develop electric vehicle batteries that do not need rare metals like cobalt, but this is not an easy problem.