Regarding a traffic accident between 4 cars and 6 motorbikes that occurred on the evening of July 28, at Ngo Thi Nham Street (Hanoi), 1 person died, 5 people were injured, Dr. LS Dang Van Cuong – Chinh Phap Law Office said that this was a serious traffic accident, initial information that the driver showed signs of losing control, unable to control the speed, leading to a continuous accident.

In this case, the consequences of loss of life, health and property of the victims are very obvious. Therefore, the remaining problem is to clarify whether the cause of the accident is due to technical factors or the fault of the driver, this is the key form of the problem to determine whether to prosecute a criminal case or not. 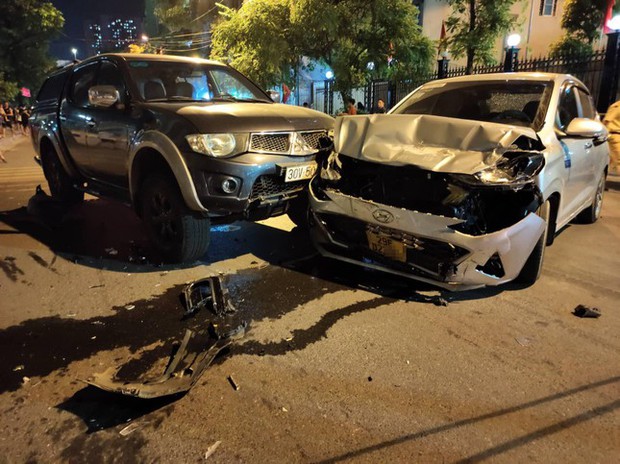 The scene of the accident caused damage to many cars.

“In case there are grounds to show that the Hyundai Santafe driver was not in control and could not control the speed, leading to the accident, the investigating agency will prosecute a criminal case and prosecute the accused against the man. this man to handle according to the provisions of the law “- Lawyer Cuong said.

According to lawyer Cuong, acts of guilt, failure to comply with regulations to ensure safety when participating in road traffic, causing serious damage to the life, health and property of others may be prosecuted for liability. criminal liability for the crime of “violating regulations on participating in road traffic” under Article 260 of the 2015 Penal Code, amended and supplemented in 2017.

Specifically, in the case of death, the driver may be fined from 30 to 100 million VND, fined non-custodial reform for up to 3 years or imprisonment from 1 to 5 years. – 10 years without driver’s license.

In addition, the driver who caused the accident must also compensate for all damage to the victim’s family, including the cost of treatment and care for the injured victim, lost income, and funeral expenses for the victim. death and mental loss according to the provisions of the Civil Code.

Not stopping there, Hung’s car increased the throttle and crashed into a series of cars and motorbikes that were stopping at a red light in front.

As a result of the accident, one person died on the spot, and five others were injured and taken to the hospital. At the scene, 4 cars were badly damaged, many motorbikes were lying on the road. Initially, the police did not detect alcohol and drug levels on the driver.