When it comes to Hue tourism, the first thing that visitors will remember will be the mausoleums, the imperial city of Hue, the romantic Perfume River or the famous royal tea and mussel rice. But the attraction of Hue does not stop there.

It also has a primeval forest, belonging to the extremely rare system left in Southeast Asia. Many tourists or even indigenous people have chosen this as one of the must-visit places when traveling to Hue. That is the mangrove forest with a special name, Ru Cha.

Ru Cha is located downstream of the Perfume River, in Thuan Hoa village, Huong Phong commune, Hue city. From the city center, the distance to here is about 15km.

The reason the forest is named Ru Cha is derived from the tree species that occupies most of the area in the forest. “Ru” means forest, “cha” means cha tree, “Ru Cha” means cha forest. The forest has an area of ​​about 5 hectares (hectare), tea tree accounts for 90%. 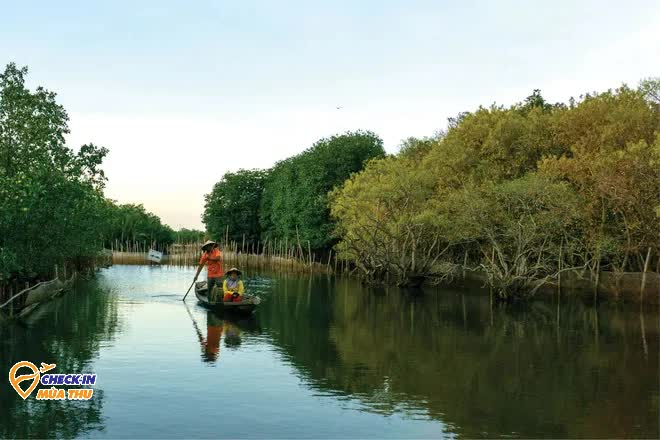 90% of the Ru Cha area is made up of tea trees. (Photo by Thua Thien Hue Newspaper)

Currently, the forest has been expanded to 22 hectares, planted with other trees such as mangrove, tiger, parrot, cork …

As mentioned above, Ru Cha forest is a rare and precious primitive mangrove forest left in our country as well as in Southeast Asia, belonging to the Tam Giang – Cau Hai lagoon system (also the largest lagoon system in Southeast Asia). ASIAN). In the past, when coming to Hue, not many people knew about Ru Cha, this place mainly welcomed many delegations who were interns and graduate students on mangroves.

However, in the past 2 years, Ru Cha has become more popular and famous with tourists both at home and abroad, especially the beauty of the forest in autumn. One of the means of promoting the image here is photography Fishing in the mangroves by Pham Huy Trung, won the first prize in the prestigious international photo contest Drone Photo Awards 2021 (Human category). 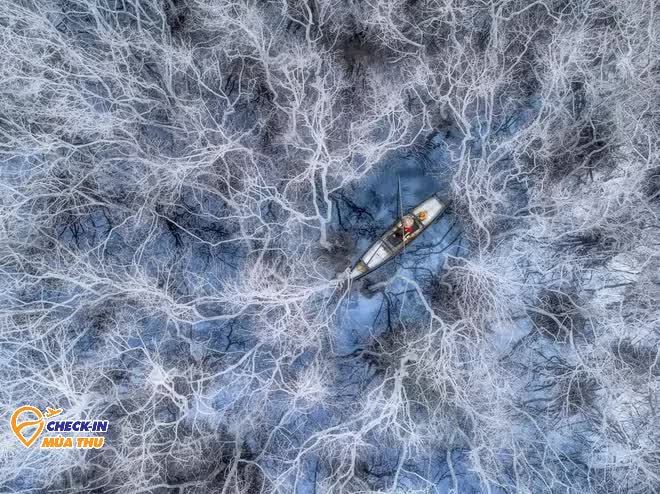 Going to Ru Cha in the fall

To get to Ru Cha, visitors can choose to travel by motorbike or bus. However, the most popular vehicle is the motorbike because of its flexibility and initiative.

In the past, when this area had not developed much in terms of tourism, the road to Ru Cha mainly had to wade through water or take a boat, causing inconvenience in transportation. However, now, the road has been renovated and built with concrete, so it is much easier to go. The concrete road winding in the middle of the forest, surrounded by tangled roots and roots, will bring a very interesting feeling of discovery.

Each season, Ru Cha brings its own beauty. This fall, especially in September, the forest will enter the season of changing leaves. The green color here will be replaced by a brilliant yellow color. 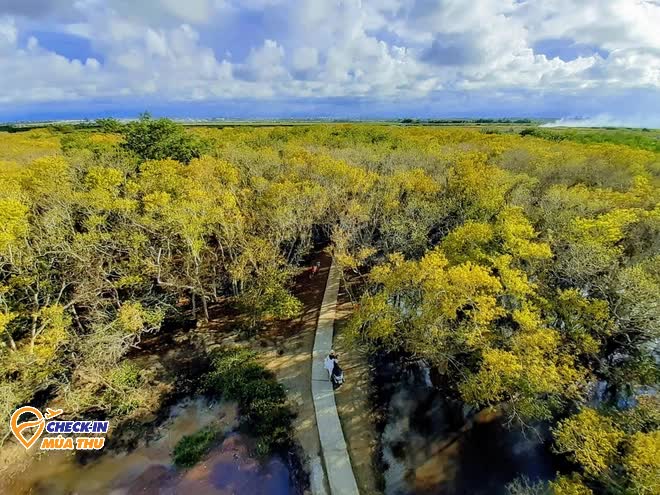 Ru Cha leaves change season in September with a concrete road winding in the middle of the forest. (Photo Tcdulichtphcm.vn) 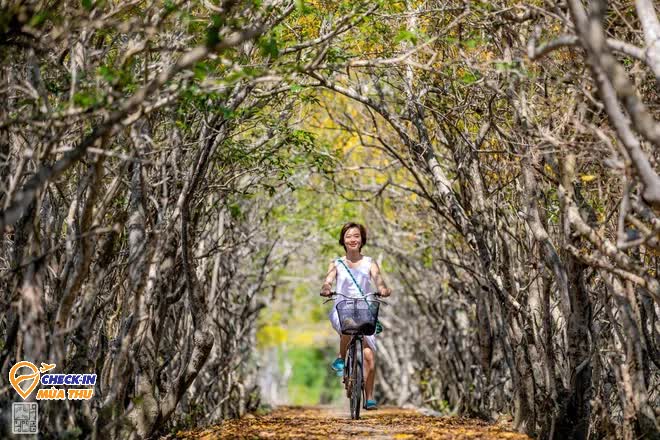 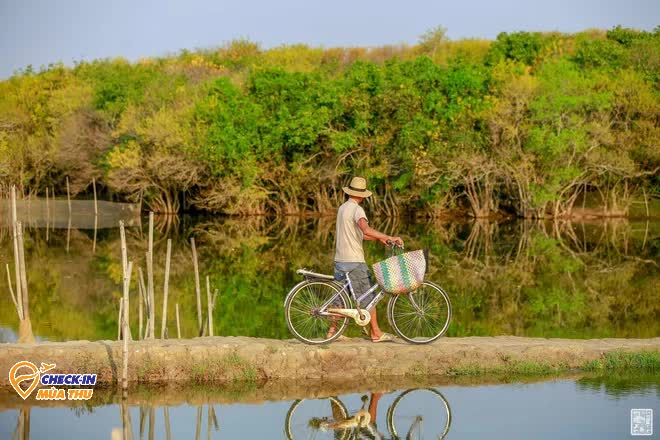 In addition to watching the scenery of the forest in the changing season of leaves, immersing in the unspoiled natural space, the sound of birds, insects everywhere or the rustling of forest leaves, visitors also have the opportunity to admire the sunset. from above.

A few years ago, in Ru Cha, a concrete observatory was built, located right in the middle of the forest. This is a place to serve the needs of tourists to see the whole view of Ru Cha from above. Especially in the late afternoon, watching the sunset from this position will be very beautiful, when the orange-red color of the sunset blends into the same vast river. 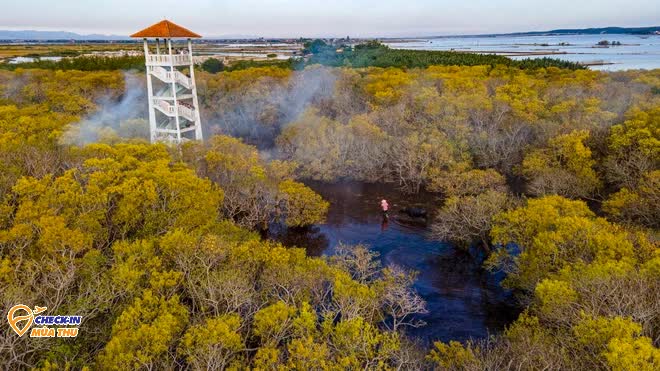 Observation tower at Ru Cha, when standing here, visitors can zoom out, enjoy the beauty of the forest. (Photo by Dinh Hoang) 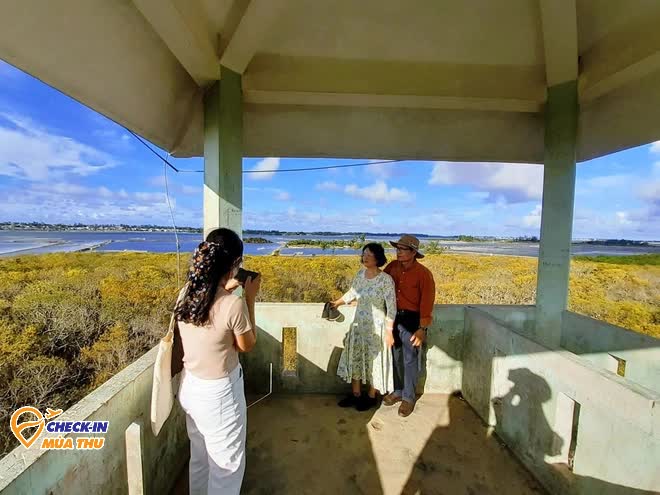 Visitors see Ru Cha from above when standing on the observatory. (Photo Tcdulichtphcm.vn)

There is also a man in Ru Cha who is known as “Robinson” or “special forest keeper”. That is Mr. Nguyen Ngoc Dap, who is over 70 years old this year. It is known that he moved to live in a small house in Ru Cha with his wife, up to now, it has been 40 years.

According to information in the Newspaper of Natural Resources and Environment, Mr. Dap is the person who contributes to the care and protection of the tea trees in the forest. When coming here, visitors can contact his family to order rice and have lunch at Ru Cha with available fish and shrimp dishes. 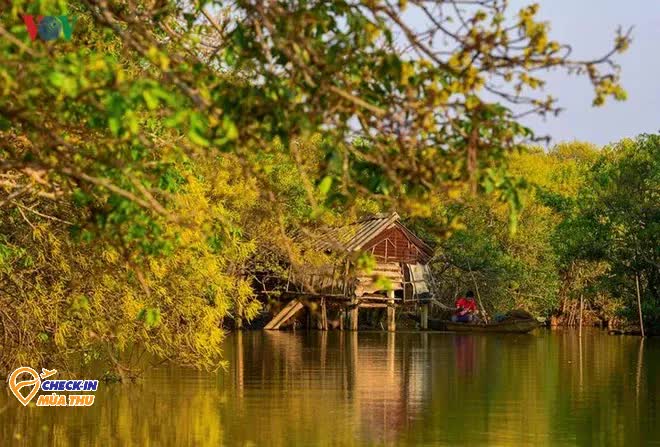 The house of Mr. Dap and his wife in Ru Cha. (Photo by VOV)

Developing Ru Cha into an even more tourist attraction

Currently, with the development of social networks and internet platforms, the image of Ru Cha has become more known to tourists, both to domestic and foreign tourists, especially young people.

This is the reason why the number of tourists coming to Hue to visit and explore this mangrove forest is increasing day by day, especially in this autumn.

However, Ru Cha is not only an eco-tourism destination but also plays an important role in biodiversity, as a “screen” to control floods, protect crops and residents in Huong Phong commune in the rainy season. . 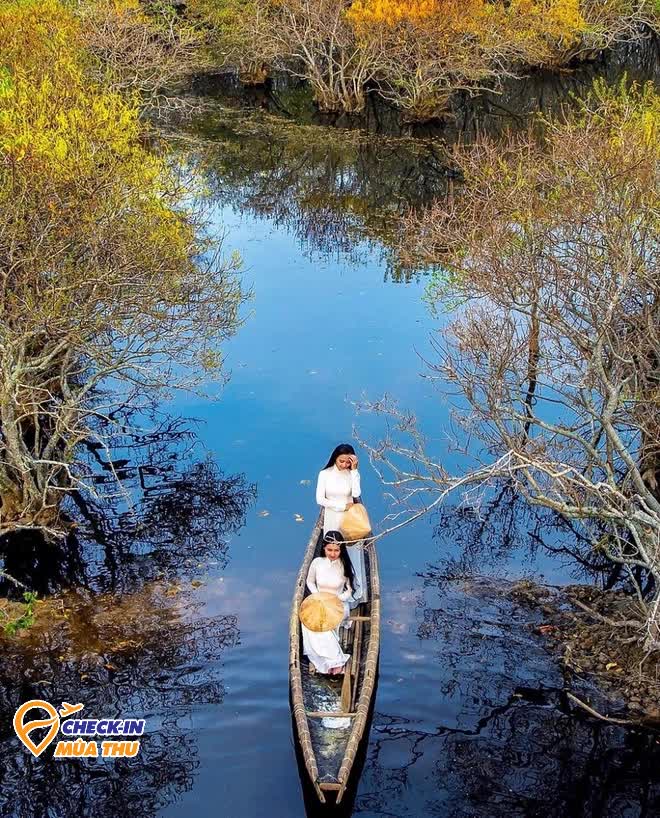 If you are a tourist when coming to Ru Cha, please pay attention to environmental protection and landscape protection to maintain the beauty of the rare mangrove forest of our country.