The match between Arema 2-3 Persebaya in the Indonesian National Championship that took place on the evening of October 1 turned into a tragedy, when a riot occurred that left 127 people dead and many injured.

Inspector General of East Java Police – Nico Afinta confirmed: “There were 127 people died in the riot, of which two members were policemen.” 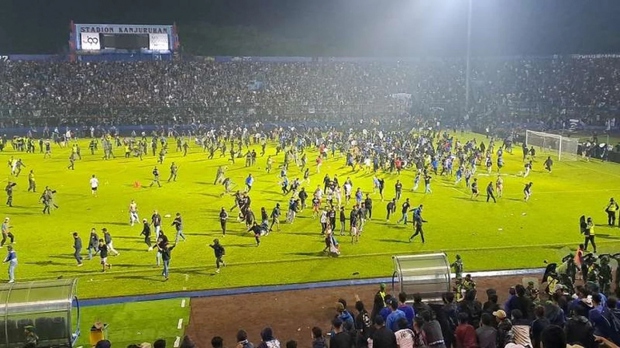 The chaotic scene after the match between Arema and Persebaya. (Photo: Bola).

CNN Indonesia quoted Inspector General of East Java Police – Nico Afinta, 34 people died in Kanjuruhan Stadium. Other victims died on the way to the emergency room and at the hospital.

Inspector General of East Java Police – Nico Afinta informed about the reason for the riot, that was initially the match went smoothly, but when the match ended, some Arema FC fans felt frustrated so went down to the field to look for players and team officials.

This police official said that the officers on duty had to use tear gas because there were some members who were extremist, acting dangerously to the players and club officials.