Influenza A patients on the rise

At the National Hospital for Tropical Diseases, in recent two weeks, more than 100 cases of influenza A have been examined and hospitalized for treatment. In particular, there is a day when 20 patients at the same industrial park are admitted to the same hospital due to influenza A.

Since the beginning of the year until now, Thanh Nhan Hospital has received more than 100 patients with influenza A who have to be hospitalized, on peak days there are 30-40 patients to visit. Subjects are aged 15-70, most commonly 20-40 years old, working age, communicating with many people.

According to information from the Hanoi Center for Disease Control, in June the number of influenza A cases in the city was 887, an increase of 60% compared to May, most of the symptoms were mild.

As for flu patients, from the beginning of the year to mid-July, Hanoi city recorded 2,605 flu cases, no deaths. The number of cases has tended to increase in the past 4 months, in 23/30 districts, towns. 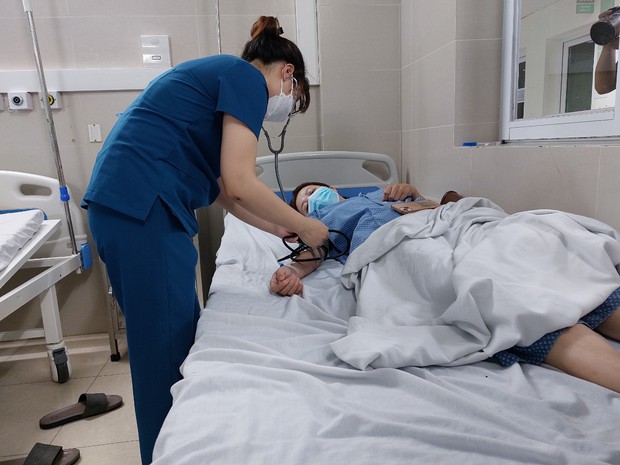 Influenza A patients are treated at Thanh Nhan Hospital.

Dangerous complications of influenza A

Most people with influenza A recover within a week without the need for medical attention. However, in some cases, influenza A can cause serious complications and death as the disease turns malignancy.

Dr. Dr. Dang Thi Thuy – Head of Pediatrics Department (Central Hospital for Tropical Diseases) said that seasonal flu usually has a benign course but can cause serious and dangerous complications in people with chronic cardiovascular and respiratory diseases. steam.

Dr. Do Thien Hai, Deputy Director of the Center for Children’s Tropical Diseases (National Children’s Hospital) said that people with influenza A can recover after 5-7 days, but for children, the disease can become severe and easy to appear. complications present. Specifically, in the cases of visiting and treating at the hospital, many children had pneumonia and respiratory failure, 45% of children with influenza A admitted to the hospital had seizures, and 6% showed encephalitis.

Some cases of influenza A can progress to severe symptoms such as high fever, shortness of breath, cyanosis, pulmonary edema due to heart failure and can be fatal.

The disease can easily turn into malignancy in cases with a history of chronic diseases, impaired resistance and immunity such as kidney failure, diabetes, alcoholics, pregnant women, the elderly, and young children.

In particular, the most dangerous complication of influenza A is cerebral edema and severe liver damage, with a very high mortality rate.

For pregnant women, influenza A can cause pneumonia or miscarriage. If you catch the flu in the first 3 months, it can cause complications in the fetus, especially central nervous system disease, but it is not teratogenic.

Therefore, if you see any abnormal symptoms, you should immediately take the patient to a reliable medical facility, preferably a specialized medical facility for timely examination and treatment, to avoid complications. regrettable evidence.

How to prevent influenza A

Dr. Dr. Dang Thi Thuy recommended that influenza A is a very contagious disease, everyone can get it, especially young children, the elderly, and pregnant women.

The most effective way to prevent disease is to get an active flu vaccine, the appropriate time to inject it is 3 months before the winter-spring transition (July-September every year) so that the body can produce the necessary antibodies to fight the disease. against viruses. The flu virus is constantly changing, after a year, the antibodies will also gradually decrease, so it is advisable to get a booster shot every year.

In addition, it is necessary to pay attention to improve the health of children: give them a nutritious diet, supplement with vitamins, minerals, multivitamins according to age …

Maintain personal hygiene such as washing hands with antibacterial soap or antiseptic solution before eating, when going from outside to home, after going to the toilet. Avoid touching your eyes, nose and mouth with your hands.

Regularly clean the children’s living and playing space, especially the classroom environment, toys and items children come into contact with every day.

This is a respiratory disease, so avoid gathering in crowded places, especially contact with people with flu. It is necessary to wear a mask when going out to limit the spread of infection.