Scientists from the University of California-Riverside (UCR – USA) have simulated the arrangements of the Solar System. They found that when the orbit of Jupiter – the largest planet in the Solar System – becomes flatter or “eccentric” it causes major changes in our Earth’s orbit.

Planets have circular orbits, maintaining a stable distance from their star. When this orbit is more eccentric or oval, the planets will come closer and farther from their stars at different points.

A star’s proximity determines how much radiation it receives and how it behaves will affect the planet’s climate. Space.com.

Lead researcher and UCR planet and Earth scientist, Pam Vervoort, said: “If Jupiter’s orbit becomes more eccentric, the team finds that Earth’s orbit will also become eccentric, too. This makes the Earth sometimes even closer to the Sun than it is now.” 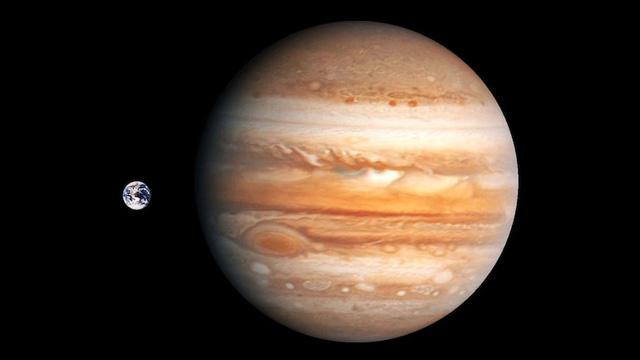 Image of size comparison between Earth and Jupiter – Photo: NASA

As a result, some of the coldest spots on our planet will warm and reach temperatures in the habitable range – defined as 0⁰ to 100⁰C – for many life forms on Earth.

The team thinks the results could help astronomers determine which planets outside the Solar System are habitable.

This is based on a planet’s distance from its star. This variation in distance determines the amount of radiation received by different parts of the planet, thereby creating the seasons.

Currently, the search for habitability depends on whether a planet is in the habitable zone of its star and whether the region around a star has the right temperature to allow liquid water to exist. .

UCR astrophysicist Stephen Kane said: “The first thing people look for in exoplanets, the habitable zone. Also, look at the distance between a star and a planet. Is there enough energy for liquid water to exist on the planet’s surface?”

Other factors can also affect a planet’s habitability, including a planet’s tilt which affects the amount of radiation it receives from its star.

UCR scientists found that if Jupiter were to be closer to the Sun than it is about 742 million km away, it could cause an extreme tilt on Earth. This will result in the Earth receiving less sunlight. At the same time, some areas of the Earth’s surface will experience sub-freezing temperatures.

Researcher Kane concludes: “It is important to understand Jupiter’s impact on Earth’s climate, how it influenced our orbit in the past, and how it might change them. How will we be in the future again?”