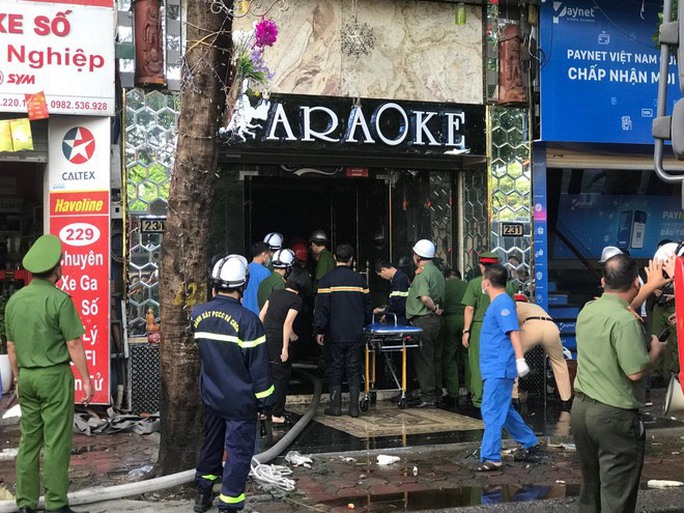 According to Mr. Bui Tuan Anh, Chairman of the People’s Committee of Cau Giay District, the karaoke bar at 231 Quan Hoa was granted a business registration certificate by the District Economic Department for the first time on January 14, 2013. The legal representative is Mr. Nguyen Duy Trung, born in 1978.

In April 2013, the People’s Committee of Cau Giay district granted a license to conduct karaoke business for ISIS establishments. At the end of August 2013, Cau Giay District Police issued a certificate that this karaoke bar was qualified for security and order to do conditional business lines.

After that, Mr. Nguyen Duy Trung authorized Mr. Pham Duy Hung (SN 1983) to manage the business at ISIS for 10 years.

According to Chairman of the People’s Committee of Cau Giay district, before the fire, the ISIS karaoke bar had stopped operating because it had not yet issued a certificate of satisfaction of security and order conditions as prescribed in Decree 96 of the Government.

Regarding this particularly serious fire, Chairman of the Hanoi People’s Committee, Tran Sy Thanh, requested the City Police to urgently investigate and clarify the cause of the fire and handle it in accordance with the law.

The new Chairman of the Hanoi People’s Committee assigned the City Police, the Department of Labor, Invalids and Social Affairs, the People’s Committee of Cau Giay District and related units, according to their assigned functions and tasks, to organize visits, encouragement and implementation. fully implement policies for cadres and soldiers who have died and their families; coordinate in performing funeral rites according to regulations; assigned the City Committee of Emulation – Commendation to coordinate with the City Police to urgently advise and propose the City People’s Committee to have a form of reward to posthumously award cadres and soldiers with a brave spirit who sacrificed themselves while on duty. service to protect the people.

The ISIS karaoke bar has a scale of 5 floors, 1 mezzanine, 1 tum, volume 1,260 m3, the main bearing structure is concrete and reinforced.

Currently, Hanoi City Police are investigating and clarifying the cause of the ISIS karaoke bar fire.

The scene of the fire