According to the Financial Times, Apple is expected to break the company’s average iPhone price record twice in the coming months as customers choose to buy more expensive “Pro” models, thereby helping to boost the giant’s profits. American technology.

Data from Counterpoint Research shows that demand for the new iPhone 14 lineup launched earlier this month has been strong enough to predict that the global “average selling price” (ASP) of iPhones will increase. to a record of $892 in the third quarter and $944 in the fourth quarter.

This analysis by Counterpoint Research is based on the company’s predictions about consumer demand, market information and exchanges with suppliers. Previously, the record for the average selling price of iPhones globally reached 873 USD in the fourth quarter of 2021.

The average iPhone selling price is an important metric about Apple for Wall Street financiers, as smartphone sales still account for about 50% of the giant’s revenue.

The trajectory of increasing the average selling price for iPhone globally, from only $690 at the end of 2015 to $873 by the end of 2021, is all the more interesting when “apple” has chosen not to raise the price of mobile devices. The latest action was launched earlier this month. The decision is considered by many analysts to be the “biggest surprise” of Apple’s annual product launch event. 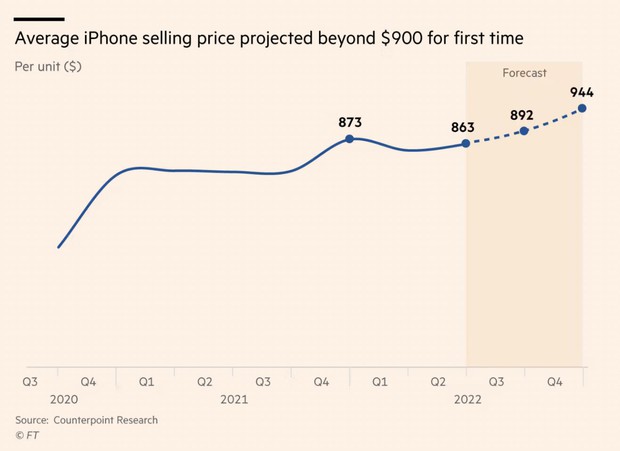 The trend that causes the global average iPhone selling price to increase in the coming quarters is the high demand for iPhone 14 Pro and Pro Max products, equipped with more powerful chips, 48-megapixel cameras and unique “Dynamic Island” mode. .

When the Evercore ISI research team surveyed about 4,000 consumers this month, they found that 56% of those likely to buy an iPhone planned to buy a Pro model, up from 41% last year. last. Analysts predict that next year’s ASP will fall to around $940, about 10% above the bullish cycle when Apple launched the iPhone 13 lineup.

“We’re increasing our iPhone revenue estimate for the next four quarters on the back of stronger-than-expected ASP growth,” Evercore analyst Amit Daryanani told clients.

The figures show that Apple is in a much better position than it was in January 2019, when it was forced to issue a revenue warning for the first time in 16 years due to a sharp drop in iPhone sales in China.

Since then, Apple has captured a larger market share in China thanks to the launch of 5G-enabled iPhone models in 2020. With the fall of Huawei, the company has struggled to sell electricity. phone supports 5G technology after sanctions from the US side. According to Counterpoint Research, from the end of 2020 to the end of 2021, Apple’s market share in China has increased from 15.9% to 23%.

Counterpoint analyst Archie Zhang said: “Other Chinese Android manufacturers, such as Vivo, Oppo, and Honor, have all entered the premium segment. However, the premium brand’s position in the market remains. cannot be built overnight.

Globally, the market for premium phones priced above $400 has outperformed overall sales for nine consecutive quarters. In which, the giant Apple accounted for 57% market share in the second quarter alone.

The ultra-premium segment of phones priced above $1,000, nearly doubled in the second quarter compared to the same period a year ago. And Apple has a 78% share in that market.

The upward trajectory for iPhone ASPs reflects the success of a strategy that Apple began building in 2018 when it stopped reporting iPhone sales each quarter. That move sparked “peak iPhone fear,” while Apple argued it was shifting its focus from output to revenue and profit.

Analysts now believe that Apple is in the process of transitioning from ASP to “user lifetime value,” a strategy to increase revenue from its more than 1 billion iPhone users with a range of services. expansion service.

In late 2020, the company launched the Apple One, which offers a bundle of Apple services that include Music and iCloud for a discounted price. The next step is for the iPhone itself to be part of this plan, which allows users to pay a perpetual monthly fee in exchange for new services and smartphones every year or two without cost. incur any upfront costs.