On the afternoon of September 30, Minister of Education and Training Nguyen Kim Son and representatives of the Hanoi National Assembly Delegation met voters in Ha Dong district.

At the conference, voter Dao Van Phe mentioned that some provinces and cities have a serious shortage of teachers due to unreasonable policies, salaries are not guaranteed, and they are not allowed to enter the payroll…

Minister of Education and Training Nguyen Kim Son said that the country currently lacks about 100,000 teachers out of a total of 1.6 million teachers.

Recently, the Politburo and the Government have approved for the education sector to employ more than 64,000 teachers from now until 2025, meeting an important part of the shortage of teachers. In 2022 alone, the target of more than 27,000 teachers nationwide is approved. 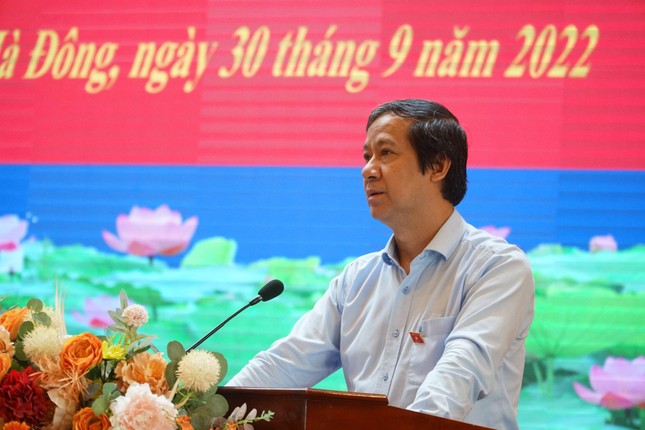 Mr. Nguyen Kim Son also informed that in 2022, nationwide, the total number of teachers who quit their jobs is more than 16,000 people/1.6 million teachers in total. On average, one person quits every 100 teachers, accounting for 1%.

Minister Nguyen Kim Son said that there are many reasons for the shortage of teachers. Firstly, the annual natural population growth rate of our country is still very high. Every year, 300,000 – 400,000 children are born, while the number of teachers to maintain classrooms only corresponds to natural population growth. But for many years, it has not been able to recruit more teachers and has reduced the staff by 10% every year.

Along with that, the situation of oversupply is local in nature, in which there are a number of labor intensive areas such as urban, suburban and industrial areas, leading to the demand for classrooms, teachers, especially There is a very high increase in the number of teachers at preschool and primary school levels. While some areas are plain and rural, the number of students has decreased.

Another reason, according to Mr. Son, is the implementation of the new high school program in 2018, the standard class with primary school does not exceed 35 children/class and middle and high school does not exceed 45 children/class. But in Hanoi, especially in suburban districts, the ratio of 50-60 students per class is normal. If calculated according to this number and to reach the standard rate, it leads to a shortage of teachers.

Minister Nguyen Kim Son also stated that in the 2018 new general program, the implementation of teaching time is not only 1 session but 2 sessions and achieved the goal of universalizing 5-year-old preschool. To achieve these goals, they need a large number of teachers.

In addition, the program also wants to equip students with new qualities, competencies and skills, so there are some more subjects such as informatics, foreign languages, art, music…so it is necessary to supplement the number of teachers. .

For preschool teachers, according to Mr. Nguyen Kim Son, some provinces have quotas but cannot recruit them because they do not have resources or resources, but many people choose to work in other jobs to earn higher incomes. The Minister of Education and Training said that preschools teach children very hard, while teaching, coaxing and taking care of “the pressure is very high, the camera is rotating all the time, parents monitor every hour, every minute …”, in When the income is lowest, newcomers are only 3 – 4.5 million VND/month.

The educational innovation in the general education program also requires improving the quality of teachers. From the demand for innovation, the pressure increased leading some teachers to find other jobs. Not to mention now that there is a private education, so teachers switch to it.

Regarding the solution, Minister Nguyen Kim Son mentioned the proposal to the Politburo and the Central Organization Committee to increase the staffing quota, but it is partially resolved. To solve it, there needs to be a source and the industry is implementing the ordering mechanism. In which, pedagogical schools must calculate the number of training students to meet the needs of provinces and cities, especially teachers of new subjects.

In addition, it is necessary to encourage the use of the local budget through the decision of the People’s Council to deal with the contract signing with teachers…

According to Mr. Nguyen Kim Son, because teachers account for nearly 70% of the total number of civil servants and public employees, the salary increase cannot be solved overnight. Currently, the industry is focusing on improving the working environment, improving professional qualifications with the spirit of maximum support… to help teachers feel secure in their work.

Earlier, talking at a meeting with voters in Thanh Oai district on the morning of September 30, Minister of Education and Training Nguyen Kim Son said that the operation regulations of the parent-student association “is a very sensitive issue”.

Mr. Nguyen Kim Son said that at the beginning of the school year, the press had reflected on the fact that some parents’ associations were involved in the collection and expenditure of…

“This matter, the Ministry is considering amending the circular regulating the activities of the parent-student association. But how to fix it and how to orient it still needs to be considered very carefully,” added Mr. Nguyen Kim Son.