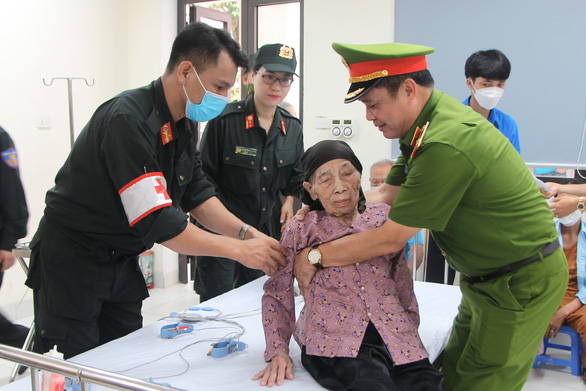 On the morning of August 9, the Mobile Police Command directed the Professional Training and Retraining Center 1 to coordinate with the Health Department – K02 and the People’s Committee of Chuong My District (Hanoi) to organize a program to visit and give gifts. , health examination and consultation, free medicine distribution for 97 relatives, people with meritorious services to the revolution in Dai Yen commune (Chuong My district).

Major General Le Van Ha, deputy commander of the Mobile Police Command, shared that although the war has gone far, there are still many unnamed heroes and martyrs resting in the distant mountains and forests. rivers and in the vast ocean have not been gathered to their homeland.

There are still so many wounded and sick soldiers who are living in pain because of Agent Orange and the wounds on their bodies that sting every time the wind turns.

The leadership of the Mobile Police Command gave gifts to representatives of people with meritorious services to the revolution. Photo: LAM NGOC

Mr. Nguyen Van Linh, a hospital resident in Phu My commune who received a free check-up in the program, said that today he had a full health check-up, so he was very happy that the Party and State cared.

Mr. Ngo Anh Luat, a wounded soldier residing in Yen Khe village, expressed his joy at being cared for by the Party and State for health check-ups.

“I still have sequelae of illness, recurrent wounds, so it’s very difficult to walk. Today, through a visit like this, I feel happier and mentally healthier.”