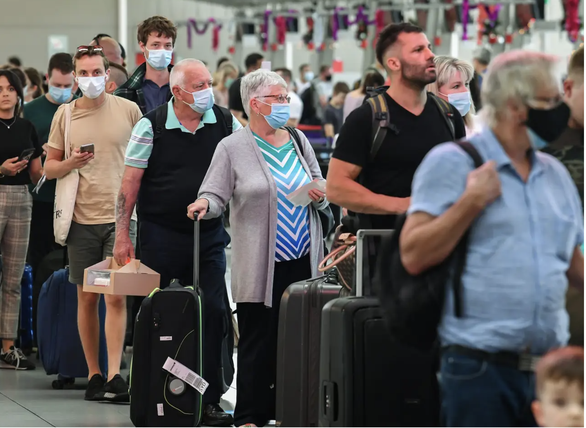 Passengers wait in long lines at many airports in the US – Photo: GETTY IMAGES

According to The Hill, since the beginning of the summer until now, airlines in the US have still struggled with the number of flight cancellations and delays that have disappointed customers due to high travel demand and a lack of staff.

Airlines have worked around the clock to address these issues, including increasing recruitment, training and improving processes to help customers check-in faster.

Earlier this week, running out of patience with cancellations and delays, a Democratic congressman proposed a bill to refund canceled flights.

Accordingly, the bill requires airlines to refund customers if their flight is canceled or the customer requests to cancel the flight within 48 hours before departure time.

Customers are also compensated if their flight is 3 hours or more behind schedule for domestic flights or 6 hours for international flights. You will also be compensated if the airline changes your destination, adds a stopover or lowers your ticket price.

Regulations on compensation for late flights are available in Europe but not yet applied in the US and often airlines “play tricks” to refund money with vouchers (travel vouchers) rather than cash.

Talking about the proposed bill, Senator Ed Markey said “it is enough that people have to waste their time fighting with airlines to get refunds for tickets purchased”.

According to him, people are also tired of having to book flight tickets many months in advance, but at the same time have to agree to a policy of no refunds if they cancel their tickets because the airline changes the flight schedule that is not suitable for them. their needs, or because of public health concerns.

Flight cancellations or delays come as the global aviation industry is recovering strongly, with many people eager to travel after two years of restrictions due to COVID-19.

According to FlightAware, flight delays spike during the peak of summer travel in the US. Since May 1, there have been about 586,000 international flights to and from the US and domestic flights in the US canceled or delayed.