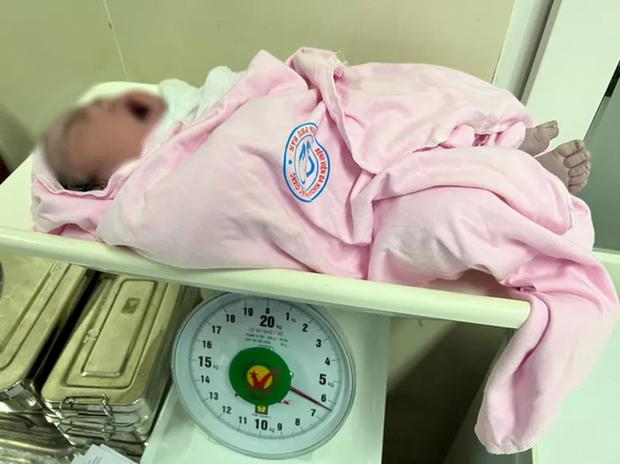 At the Department of Obstetrics and Gynecology, after prenatal testing and ultrasound, the pregnant woman is assessed that the fetus is large and weighs more than normal. The doctors consulted and concluded: the woman was in labor for the third time, 39 weeks and 4 days pregnant on the old cesarean section, pre-eclampsia with large fetus, indicated emergency cesarean section.

After 30 minutes of caesarean section with spinal anesthesia, intravenous anesthesia, abdominal incision, the baby girl was born safely with a weight of 6.2 kg before the surprise of the mother and the entire team. surgery.

According to BSCKII Tran Hoang Hung, Department of Obstetrics and Gynecology, this is a rare case, the baby with the largest weight ever was born at the hospital. In addition, the operation also encountered certain difficulties because the woman had had 2 previous cesarean sections, sticky scars, and pre-eclampsia.

Currently, after 1 day of follow-up, the mother is in stable health, can sit up and walk. The baby is healthy, sucks well, no abnormalities detected. It is expected that mother and baby can be discharged from the hospital in the next 5 days.

Through this, the hospital gives attention to large pregnant women: it is necessary to have regular antenatal check-ups to monitor the health of mother and baby. Have a reasonable diet and exercise, eat a lot of green vegetables, limit sugar and starch. Screening for gestational diabetes, avoiding many dangerous complications for both mother and baby.

Need to go to the hospital right away when headache, dizziness, dizziness, weight gain of more than 1kg / 1 week. 3 to 6 weeks after birth, a cardiologist and endocrinologist should be examined.