According to the stream of the Ministry of Education and Training, from 0:00 on August 24 to 17:00 on August 26, candidates from Tuyen Quang province make online payments on the Admissions System. Mr. Vu Dinh Hung – Director of the Department of Education and Training said: The Department has not received any feedback from candidates about difficulties in the process of paying the application fee. Everything is going according to schedule and schedule.

“Suppose, for some reason, the candidate has not yet made the online payment, we will make it as easy as possible to complete this. Thereby, students are not interrupted at any stage in the enrollment process.” – Mr. Hung confirmed.

In Quang Ngai province, Mr. Huynh Van Thai – Deputy Head of the Department of Politics and Thought and Professional – Continuing Education (Quang Ngai Department of Education and Training) informed: As of 5:00 p.m. on August 29, nearly 27,000 aspirations of more than 9,000 people Candidates in the area have completed the payment of the application fee on the System. “According to regulations, candidates from Quang Ngai province pay fees from 00 am on August 27 to 5:00 pm on August 29. However, by 5:00 p.m. on August 31, if candidates have not yet paid the fee, we will support them to complete this,” Thai emphasized. 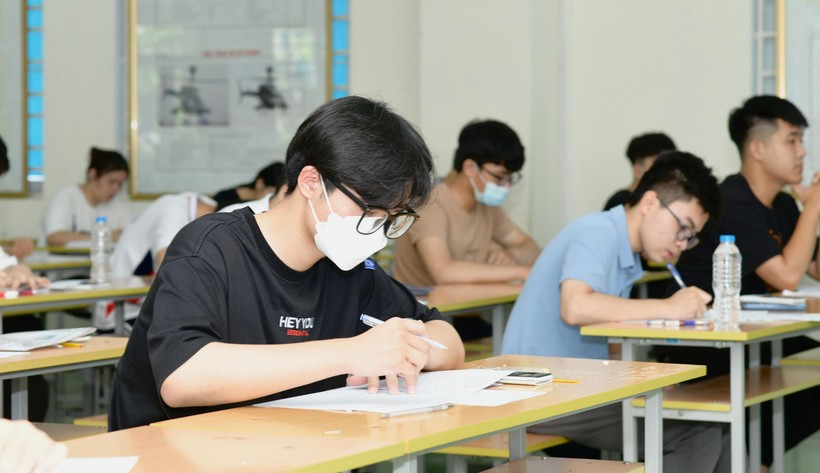 Candidates participating in the Thinking Assessment Exam in 2022 organized by Hanoi University of Science and Technology. Photo: NTCC.

According to Mr. Thai, the candidate’s fee payment process went smoothly. There are a few confusion cases that have been supported. For example, some candidates mistakenly think that the case of admission by high school graduation exam scores will pay the fee online. The remaining cases will be submitted directly at the training institution. In addition, there are children studying in Quang Ngai, but permanent residence in Ba Ria – Vung Tau province. Therefore, this candidate cannot log in to the system to pay the fee. After being instructed, I completed the payment procedure according to the channel of Ba Ria – Vung Tau province (From 00 hours on August 29 to 17:00 on August 31).

According to regulations, before 5:00 p.m. on August 31, candidates must complete the payment of the online application fee. Currently, the payment system is open to all provinces/cities. Candidates who have not paid urgently complete. The payment system is implemented on the National Public Service Portal and connected to 15 main online payment channels of the country.

Records in localities show that the online payment system is operating stably, supporting candidates is done in a timely manner 24/7, there is no congestion or overload. However, there are some candidates who report that they have made transactions but have not been successfully recorded or made payments twice… According to a representative of the Ministry of Education and Training, these issues will be supported to ensure all candidates All students participating in online payment have completed and recorded the transaction on the system. In cases where candidates pay twice or more, the system will check and refund the money after August 31.

Assoc. Prof. Dr. Nguyen Thu Thuy – Director of the Higher Education Department (Ministry of Education and Training) said that from September 1 to 17:00 on September 3, the CSDT coordinated with relevant units to review the system in advance. when downloading data, recruitment information. Before that, from August 27 to August 29, 2022, all training institutions practiced recruitment with a simulated database; the process, time, and role of the training institutions are specified in the training materials.

Assoc. Prof. Dr. Nguyen Xuan Thach – Head of the Training Management Board (Academy of Finance) – said that the Academy has been following the Regulation on enrollment and enrollment schedule of the Ministry of Education and Training.

“The recruitment process with the simulated database went smoothly, so we were confident when we officially started working.” – Assoc. Prof. Dr. Nguyen Xuan Thach, Head of the Training Management Board (Academy of Finance) discussed and said: In the days of September 1 to September 3, the Academy of Finance will review the database. (database) and download on the System, organize recruitment from 7 am on 4/9. Before 5:00 p.m. on September 17, the Academy entered the matriculation score and admission results into the system; review and announce the results of the first round of admission to candidates.

Dr. Kieu Xuan Thuc – Vice Rector of Hanoi University of Industry – said: The recruitment practice with the simulated database went smoothly, ready for data download and official admission. In order for the list of successful candidates to be close to the defined enrollment quota, Hanoi University of Industry has arranged staff with experience in statistics, data analysis, information processing… about recruitment. students to control the proportion of virtual candidates that match the admissions process.

Previously, the Ministry of Education and Training organized professional training on recruitment and handling of university and college admission requirements for training institutions in the Southern and Northern groups and independent training institutions. The training contents include: Admission database, admission process, software functions, practice using the software, monitoring the candidate’s payment of enrollment fees on the System through the National Service Portal. family.

Currently, a number of training institutions have formed recruitment groups in the North and South regions. Teams need to agree on mutual support in recruitment and virtual screening. The training institutions need to calculate the adjustment of the expected score, the list of candidates expected to be admitted after each virtual filter in the group and the nationwide virtual filter to ensure the official list of candidates to be admitted to the training institution after the final screening. nationwide virtual (September 15) close to the enrollment target of the CSDT.