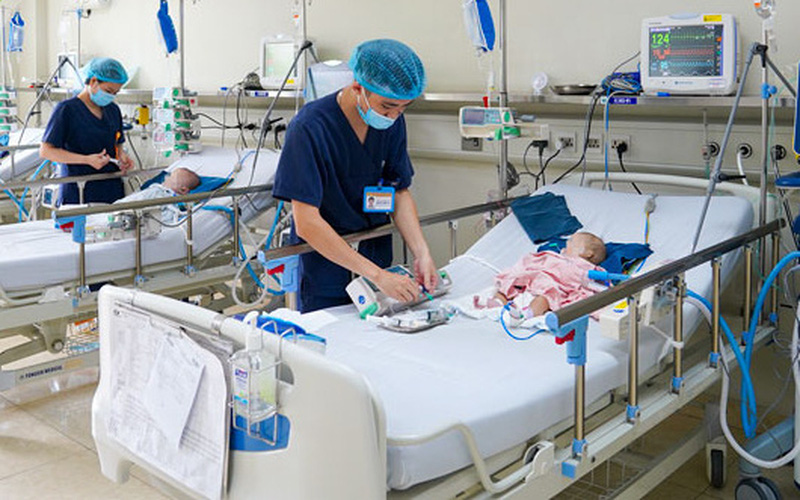 Caring for children at the National Children’s Hospital. Photo: BVCC

The meeting took place after many hospitals in Hanoi warned about a sudden increase in the number of children infected with Adenovirus. Notably, at the National Children’s Hospital alone, more than 1,400 cases were recorded, 7 children died.

According to a preliminary report at the meeting, the National Children’s Hospital had the highest number of respiratory infections patients who were found to have Adenovirus among medical examination and treatment facilities in Hanoi. Since the end of August until now, the number of cases of adenovirus has increased. The National Children’s Hospital has recorded over 1,400 cases of Adenovirus.

From September 12 to 21, 2022, the number of Adenovirus cases accounted for 10% of all hospital visits. Of the infected cases, 80% are pediatric patients in districts of Hanoi. There have been 7 deaths in children with underlying diseases, co-infection with Adenovirus. On September 22 alone, the hospital detected 150 cases, of which half of the children needed to be hospitalized. 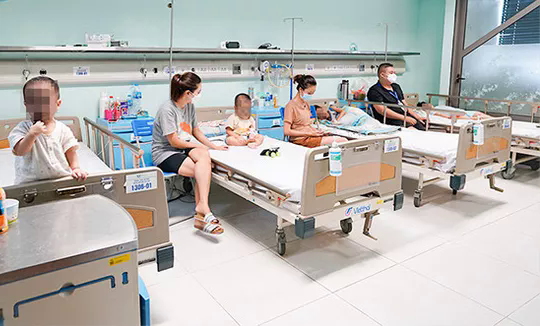 An increase in pediatric patients with Adenovirus at the National Children’s Hospital. Photo: BVCC

Not only at the National Children’s Hospital, at Bach Mai Hospital and the number of hospitals in Hanoi have also recorded nearly 100 cases of Adenovirus.

At the meeting, representatives of hospitals said that because September is the time of admission and the weather changes, the number of children with respiratory diseases accounts for 60-70% of the number of pediatric patients who come to the clinic, leading to overcrowding. locally at certain times of the day, during the week.

Currently, the National Children’s Hospital has arranged 300 beds to collect and treat pediatric patients infected with Adenovirus hospitalized with mild diseases, diseases with respiratory damage alone or in combination with underlying diseases and comorbidities. heavy.

What experts are concerned about is that children with underlying medical conditions and severe comorbidities if co-infected with Adenovirus will make the disease worse.

A representative of the Central Institute of Hygiene and Epidemiology said that there are currently no outbreaks of adenovirus in the community.

After hearing opinions from representatives of hospitals, Dr. Nguyen Trong Khoa, Deputy Director of the Department of Medical Examination and Treatment said: The fact that many children have adenovirus is currently a public health issue that needs attention. This is an infectious disease belonging to group B, however, if the patient has serious, complicated diseases or requires surgical intervention, if infected with adenovirus, there is a high risk of death.

The Deputy Director of the Department of Medical Examination and Treatment suggested: In the immediate future, hospitals need to arrange separate rooms for respiratory diseases, do not share other diseases, continue to implement infection control measures such as wearing masks. , disinfecting … not to spread the disease. At the same time, strengthen the communication work without causing panic in the community.

Dr. Nguyen Trong Khoa also said that the Ministry of Health will update and issue guidelines for treatment of Adenovirus disease, which will develop admission criteria for Adenovirus cases as a basis for doctors to examine. diagnose.

Dr. Nguyen Trong Khoa suggested the Hanoi Department of Health to plan and have a plan if the number of patients increases, there are solutions to classify, collect, and treat appropriately; need to be proactive, closely monitor developments, report daily and have a plan to prepare recovery areas for critically ill patients.