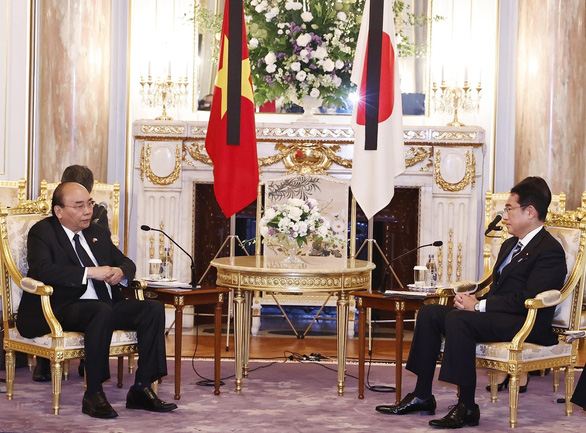 On behalf of the leaders of the Party, State and people of Vietnam, President Nguyen Xuan Phuc conveyed his deepest condolences to the Liberal Democratic Party, the National Assembly, the Government and people of Japan and the family of the late Prime Minister. Abe, a great and close friend of Vietnamese leaders and people.

President Nguyen Xuan Phuc affirmed that Vietnam always treasures the extensive strategic partnership between Vietnam and Japan; considers Japan an important and long-term strategic partner, supports Japan to make positive contributions to peace and development in the region and in the world.

Prime Minister Kishida expressed his deepest gratitude to President Nguyen Xuan Phuc and thereby extended his deepest thanks to the Vietnamese senior leaders for their special affection and respect for the country. and the people of Japan as well as to the late Prime Minister Abe personally; Japan affirmed that Japan attaches special importance to relations with Vietnam and highly appreciates the achievements of economic and social development, position and increasingly important role of Vietnam in the region and in the world.

The two leaders expressed their satisfaction at the strong, comprehensive and substantive development of the Vietnam-Japan relationship, and agreed on a major direction to develop the extensive strategic partnership between Vietnam. – Japan aims to celebrate the 50th anniversary of the establishment of diplomatic relations between Vietnam and Japan in 2023.

Prime Minister Kishida affirmed that the Japanese Government continues to promote the improvement of mechanisms and policies related to foreign workers, including Vietnamese in Japan; continue to support and create favorable conditions for the Vietnamese community to live, study and work in Japan.

The two leaders also exchanged views on a number of international and regional issues of mutual concern. 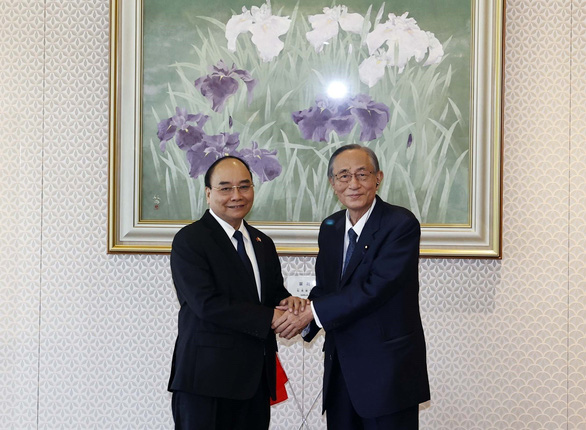 On the same day, President Nguyen Xuan Phuc met with Speaker of the House of Representatives of Japan Hosoda Hiroyuki and President of the Japanese Senate Otsuji Hidehisa.

President Nguyen Xuan Phuc expressed deep condolences from leaders of the Party, State, National Assembly and people of Vietnam to the House of Representatives and Senate as well as the Japanese people on the sudden passing of the late Prime Minister Abe. ; highly appreciates and respects the late Prime Minister Abe’s special affection, interest and contributions to the Vietnam-Japan cooperation relationship as well as in promoting cooperation between the parliaments of the two countries. great progress in recent years,

Speaker of the House of Representatives Hosoda and President of the Senate Otsuji thanked President Nguyen Xuan Phuc and conveyed their thanks to the Vietnamese leaders for sending a high-level delegation led by President Nguyen Xuan Phuc to attend the event. national mourning; consider this a special gesture, showing Vietnam’s affection and respect for the late Prime Minister Abe, and a recognition of the late prime minister’s affection and dedication to Vietnam-Japan relations. ; reiterates the sentiments and wishes to strengthen the cooperation relationship between Vietnam and Japan, and during the time of the late Prime Minister Abe very much appreciated the role of Vietnam and devoted a lot of effort to promoting the global cooperation relationship. with Vietnam.

President Nguyen Xuan Phuc highly appreciated the good development in the fields of the extensive strategic partnership, exchanges and closer cooperation between the National Assembly, parliamentarians and the Friendship Parliamentary Union. two countries in which the Group of Young Parliamentarians; affirming that Vietnam values ​​and wishes to work with Japan to further strengthen the extensive strategic partnership, especially on the occasion of the 50th anniversary of the establishment of diplomatic relations in 2023.

State President Nguyen Xuan Phuc suggested the two sides continue to deepen cooperation in various fields to follow the will of the late Prime Minister Abe, including enhancing exchanges of high-level delegations and levels. cooperation between the National Assembly and legislative bodies of the two countries. The President also suggested that the House of Representatives and the Senate support the Japanese Government to assist Vietnam in building an independent, self-reliant economy and deepening international integration through the provision of official development cooperation capital. O DA; promote cooperation in trade, investment, locality, cultural exchange, tourism, and people-to-people exchange.

On this occasion, President Nguyen Xuan Phuc respectfully conveyed the greetings of senior Vietnamese leaders to Speaker of the House of Representatives Hosoda and President of the Senate Otsuji.

Agreeing with the proposals of President Nguyen Xuan Phuc, Speaker of the House of Representatives Hosoda and President of the Senate Otsuji shared their personal feelings for the country and people of Vietnam; emphasizing that Vietnam is an important partner of Japan, especially in terms of economy – trade and human resources; affirming that the House of Representatives and the Senate continue to support the promotion of relations between the two countries, especially in infrastructure construction, ODA, technology transfer, and expansion of the Vietnamese agricultural and labor market, including Japanese localities.

To contribute to promoting and elevating relations between the two countries, Speaker of the House of Representatives Hosoda welcomed National Assembly Chairman Vuong Dinh Hue’s visit to Japan, and President of the Japanese Senate Otsuji expressed his wish to visit Vietnam and join leaders Vietnam discussed bilateral cooperation issues in many aspects, including parliamentary cooperation.

The two sides also agreed to continue to closely coordinate in international affairs, support the role and stance of ASEAN, and contribute to peace, stability, cooperation and development in the region around the world.