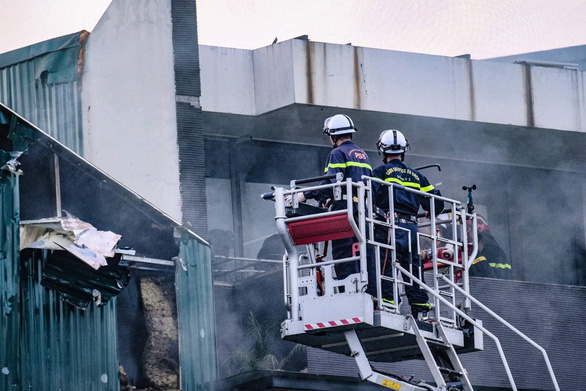 The scene of the fire on the afternoon of August 1 in Cau Giay – Photo: NAM TRAN

Information from the Central Committee of the Youth Union said that the Central Executive Committee of the Youth Union was carrying out procedures to posthumously award the “Brave Youth” badge to Lieutenant Do Duc Viet (24 years old), fire prevention officer and soldier Nguyen Dinh Phuc (19 years old) bravely sacrificed himself while on a mission to save people and property in a fire in Hanoi city on August 1, 2022.

Before that, on the afternoon of August 1, After arriving at the scene of the fire at Quan Hoa (Cau Giay), the police force for fire prevention and fighting and rescue established a commanding committee for fire fighting and rescue and sent officers and soldiers to join the team. Inspect the entire fire scene.

The fire reconnaissance team consisting of 3 comrades deployed reconnaissance, organized fire fighting, and guided 8 victims to get out safely.

During the reconnaissance process, the fire commander simultaneously deployed the attack nose along the stairs inside the house to fight the fire and sprayed cooling water for officers and soldiers. The reconnaissance team continued to return to the upper floors of the house in the hope of finding more victims still trapped.