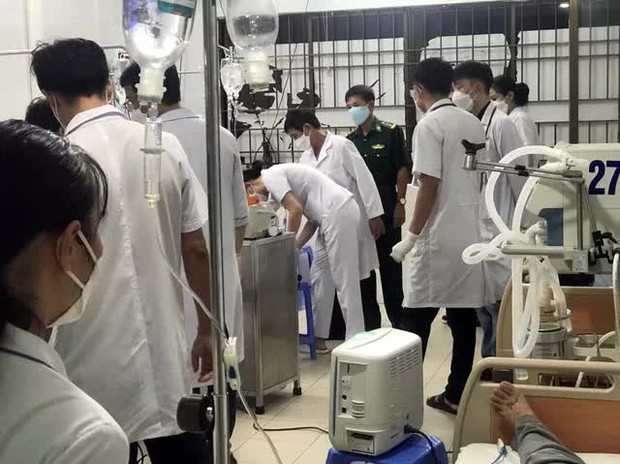 On the morning of October 1, Director of the Con Dao Military Medical Center Le Cong Tho said that out of the 9 crew members being treated at the unit, 6 were fully awake, communicating well, and 2 were undergoing active treatment. good progress and good progress. Only one person remains in a coma, being treated by doctors and nurses.

Mr. Le Cong Tho added that, on the morning of October 1, the Department of Health of Ba Ria-Vung Tau province also dispatched 2 doctors and 1 medic from Vung Tau Hospital to Con Dao to support the Medical Center to treat and cure the disease. crew members.

Before that, at about 9:05 a.m. on September 30, the Vietnam National Committee for Natural Disaster Response and Search and Rescue received a report from the Vietnam Maritime Search and Rescue Coordination Center about a very serious incident. Important: The transport ship Wu Zhou 8 located 63 nautical miles southeast of Con Dao has a crew member suspected of having food poisoning. The Committee quickly directed the Vietnam Helicopter Corporation to dispatch two aircraft departing from Vung Tau airport to the ship’s position to bring the crew back for treatment.

The Southern Helicopter Company said that, receiving urgent instructions from its superiors, the unit mobilized its flight crew, along with doctors and nurses, and at 12 o’clock on September 30, the EC-225 helicopter number VN-8622 and SuperPuma L2 number VN-8616 took off from Vung Tau airport to save lives.

In the face of an emergency situation, during the flight, the flight crew established contact with the Con Dao airport command post to request the mobilization of medical forces, police and border guards in Con Dao to be ready to provide emergency assistance to the boats. pellets. Around 13:25, 2 helicopters approached the ship Wu Zhou 8, and jointly released 2 doctors and 4 medical staff off the ship. Through inspection, 10 crew members on the ship died, the doctors quickly took the remaining 11 people in critical condition to board the plane to Con Dao airport. However, during the flight to Con Dao, one crew member did not survive and another died while moving from the airport to the Con Dao Military Medical Center.

Facing the serious situation of the incident, the leaders of Ba Ria-Vung Tau province held an online meeting with relevant units and Con Dao district to request maximum priority for the rescue of the crew members, protection and rescue of the dead. crew members to shore.

At 14:30, 11 crew members of Wu Zhou 8 were taken to Con Dao Military Medical Center. Here, all the manpower and medical facilities of the Center are ready to save lives. The Military Command and Border Guard Station of Con Dao district also sent military medical personnel to support the Center’s medical staff.

According to the Area 3 Maritime Search and Rescue Coordination Center (located in Vung Tau), on September 30, the unit’s ship SAR 272 from Vung Tau city has now approached and boarded the Wu Zhou 8 ship. preserve the bodies of 10 crew members on board, and at the same time are ready to wait for orders from their superiors.