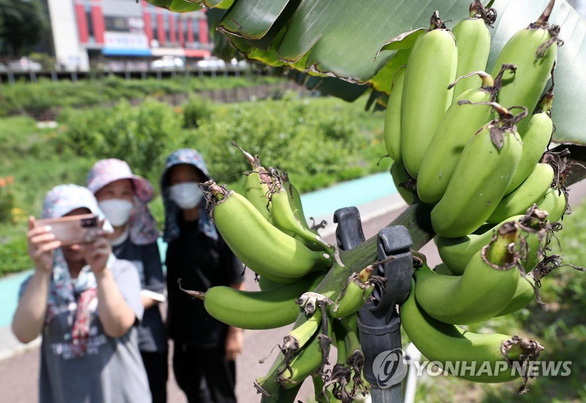 People in the area enjoy capturing the moment when the banana tree bears fruit, an image that is hard to see in a temperate country like Korea – Photo: YONHAP

Yonhap news agency on July 29 quoted a notice from the Korea Meteorological Administration warning of the highest heat wave of up to 35 degrees Celsius and the heat wave expected to last for two days could cause some damage. nationwide.

Since mid-June, Korea has continuously recorded temperature records nationwide, signaling a hot summer with the highest temperature of 31-35 degrees Celsius.

Perhaps so, in Wonju city, Gangwon province (Korea), an ornamental banana tree planted on the roadside suddenly bore fruit due to the record-breaking hot weather in recent weeks.

In fact, bananas are a typical fruit tree in the tropics and it is very difficult to reproduce, grow and bear fruit in a country located in a temperate climate like Korea.

In this temperate country, bananas are mainly grown as ornamental plants in parks for people to visit and for research and study purposes.

To be able to grow bananas, Korean farmers have to put in a lot of effort and being able to see a bunch of bananas on a tree like this is a rare phenomenon.

With advanced technology and improved farming techniques, some areas in central and northern Korea have begun to be able to grow bananas in greenhouses.

In greenhouses, banana plants must be meticulously cared for regularly to successfully flower and bear fruit.

In the 1970s, bananas were “only for the rich” fruit because tropical fruits and agricultural products were not easily found in Korea. Even at the present time, tropical fruits such as bananas, mangoes, dragon fruit… must be imported from countries such as Thailand, Philippines, Mexico, Vietnam… and sold for sale. price is not cheap.

Unique: The banana tree blooms like a pale pink lotus

TTO – In Tam Nong district, Dong Thap province, there are currently two households growing a very “poisonous” and strange lotus-like banana. These banana trees have a height of about 2m, flower chambers facing the sky and bloom like lotus flowers, petals are pale pink.