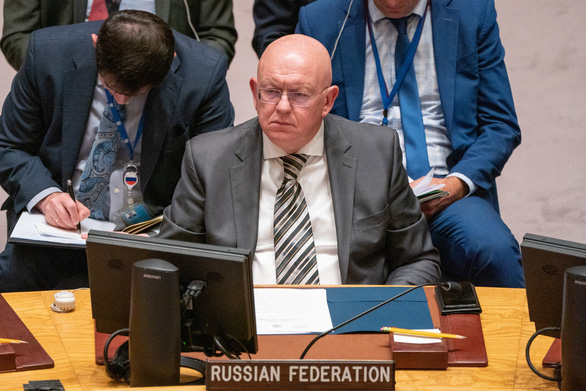 Russian Ambassador to the United Nations Vassily Nebenzia at a meeting with the Security Council – Photo: REUTERS

Recently, Russia proposed to convene a meeting at the United Nations Security Council after discovering the gas leak of two Nord Stream 1 and 2 pipelines in the Baltic Sea.

The Nord Stream pipeline is an important gas pipeline system, and also a focus of geopolitics in recent times amid tense relations between Russia and the West.

On September 27, experts discovered an explosion under the sea, raising suspicions about the scenario of sabotage causing this pipeline to leak.

On September 30, Russian President Vladimir Putin confirmed that the US and its allies had sabotaged Nord Stream. “Sanctions are still not enough. They continue to intentionally cause harm,” he said.

At the meeting at the Security Council, the issue of whether the US benefits from this case has become the focus, according to Reuters.

When asked about this, Ambassador Nebenzia did not blame the US for the culprit, but replied: “Certainly yes. U.S. liquefied natural gas suppliers must be celebrating the increased supply of gasification. liquid to Europe”.

Since Russia launched a special military operation in Ukraine, the US and European countries have imposed several rounds of economic sanctions on Russia.

Escalating tensions led to Russia stopping gas supplies to Europe, while the US was suspected of benefiting from the sale of liquefied petroleum gas.

The White House recently quickly denied being responsible for the Nord Stream explosion. Richard Mills, deputy US representative to the United Nations, said: “Let me be clear, the United States denies any suspicions about this accident, and we also deny it if anyone asserts that we are involved. mandarin”.

According to Mills, the US has increased exports of liquefied natural gas in the past few years because Russia has long ceased to be a reliable energy supplier to Europe. For years Russia has cut off supplies to Eastern Europe during the winter because of energy price disagreements.