The five images released by NASA are the Carina Nebula, the Stephan Group of Five galaxies, the Southern Ring Nebula, the infrared image of the galaxy SMACS 0723, and the spectrum of the atmosphere. planet WASP-96b.

These images are the starting point for understanding the life cycle of stars from birth to death; the process of formation, evolution, and intergalactic interaction mechanism, study of the universe in the time after the Big Bang, and give optimistic signals about the possibility of finding life on distant planets .

Life cycle of the stars

This image of the Carina Nebula, nearly 8,000 light-years from Earth, shows newborn stars with enormous mass and temperature at their centres. Extremely intense ultraviolet radiation and gas plumes from the upper atmospheres of these stars form a vast valley in the middle, covered with layers of dust and gas like steep mountains. around. 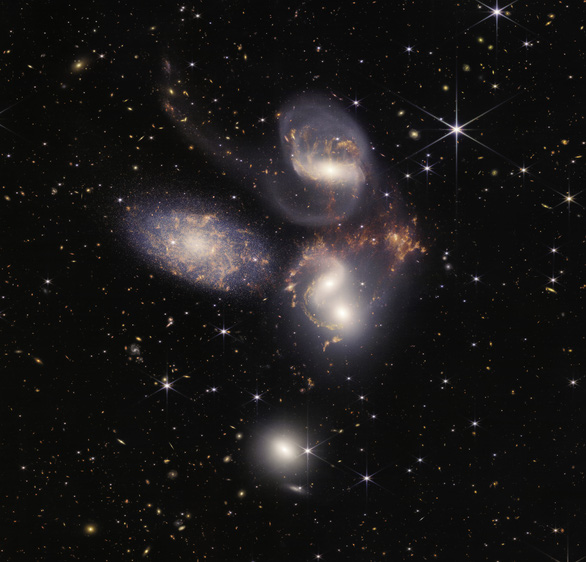 These “cliffs of the universe” are up to 7 light-years high. These observations will help scientists understand how stars are formed and under what conditions, and especially the number and effects of low-mass stars throughout the nebula. .

In contrast to the star formation in the Carina Nebula, in this image of the Southern Ring Nebula is an image of a binary star system 2,500 light-years away, one of which is in the late stages of its life. The surrounding bright rings are dust and gas emitted from the “dying” star at different stages.

Klaus Pontoppidan, Webb project scientist, said: “I find this image very interesting, because each ring of light is like a geological layer from which we can observe the history of evolution of a star in the last moments”.

Thanks to the high resolution of the image, scientists were able to learn more about the formation of these halos and clearly see the second star orbiting the main star. Together these stars form a halo around the nebula, as if sunlight were shining through a cloud. 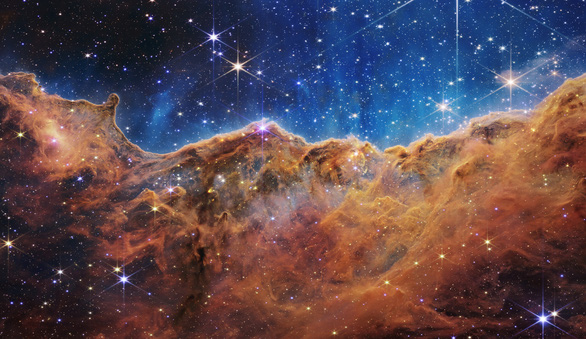 The “cosmic cliffs” in the image of the Carina Nebula (Carina Nebula) – Photo: NASA, ESA, CSA, and STScI

The image, called Stephan’s Quintet, is a group of five galaxies, located in the constellation Pegasus, nearly 300 million light-years from Earth. With its super-sensitive, high-resolution infrared detection system, JWST captures Stephan’s Quintet in unprecedented detail, with vibrant colors from clusters of millions of young stars and light from young stars. New star is born.

Gravity creates light trails from the motion away from galaxies of gas, dust, and stars. Through the thick layer of dust covering the surrounding, the image clearly captures the centers of the galaxies, showing the moving speed and structure of the gas mass near the supermassive black hole. 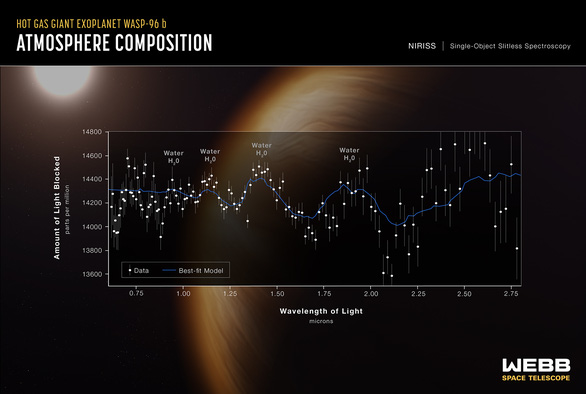 Spectrum of the atmosphere of the exoplanet WASP-96b – Photo: NASA, ESA, CSA, and STScI

Although there are no galaxies and stars shimmering with brilliant colors, the fifth image of the spectrum of the atmosphere of the extrasolar planet WASP-96b has attracted the most attention of scientists. scientist.

This spectrum analyzes the chemical composition of layers of gases in the atmosphere and detects signs of water – an important condition for life.

As well as looking for water molecules in exoplanets, the scientists are also looking for gases that make up most of the Earth’s atmosphere, such as nitrogen and carbon dioxide, and gases that are indicative of activity. biological sources such as oxygen (photosynthesis) and methane (from animals or microorganisms).

In addition, the green color in infrared images of some galaxies is also a sign of the possibility of hydrocarbons – organic compounds, the most basic ingredient of life.

JWST can be said to be a telescope system with the ability to see both the past from the dawn of the universe, and to the future of all mankind.

JWST is making people’s millennial dreams more reality than ever – the longing to find out who we are, where we come from, are we alone in the infinite universe This year, the desire to travel to explore space, as well as the desire to find another planet where humans can migrate. 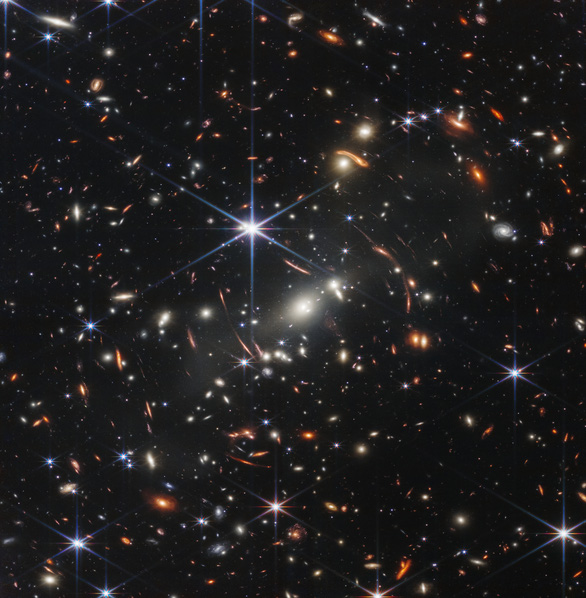 The universe in the early days

The sharpest and most detailed image of SMACS 0723 from nearly 5 billion years ago, one of the most distant galaxy clusters ever discovered, with thousands of galaxies.

The total mass of this galaxy cluster is so great that it can bend light, making itself a magnifying lens for observing more distant galaxies, which formed at a very early time in the universe.

Light from galaxies that formed within a billion years of the Big Bang when reaching us lies in the infrared wavelength region.

Therefore, the study of the early universe – including the formation, mass, growth and interaction of galaxies – requires JWST to have infrared detection and detection systems with Ultra-sensitive sensor and extremely high resolution.