Bernard Arnault is the CEO of LVMH and the third richest person in the world. He is also the richest billionaire in Europe. As of now, the boss of the LVMH empire is said to have finally started making plans to find a successor.

Recently, the billionaire announced changes to the legal structure of the company to ensure the family’s control of LVMH in the long term. This organizational model will allow Arnault’s five children to control the company for decades to come.

From the time the children were young, Mr. Bernard Arnault began to train them. It is that factor that helps his sons and children achieve many achievements.

In which, the fourth child is Frederic Arnault is also proving its ability more and more when successfully fulfilling the role of CEO of TAG Heuer, a high-end watch brand.

Frédéric was born in 1995, outstanding for his ability to speak 4 languages: English, French, Italian and German. He knows how to play the piano fluently like his mother.

The young entrepreneur graduated from École Polytechnique, one of France’s most prestigious universities, with degrees in applied mathematics and computer science. According to his LinkedIn profile, he has interned at Facebook and McKinsey & Company. 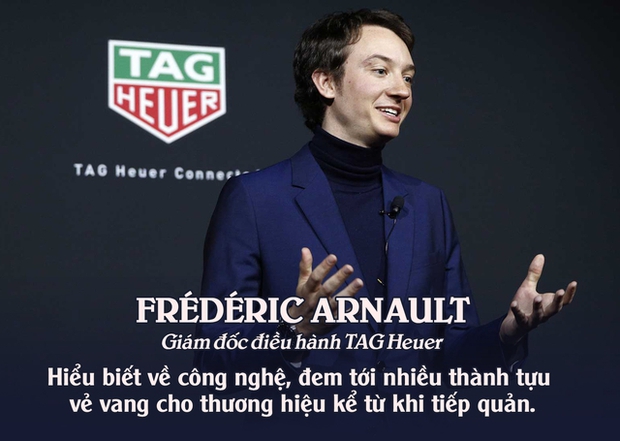 Before that, the 27-year-old also ran a mobile payments startup with a friend but sold it to BNP.

When Frédéric was 25 years old, he was appointed CEO of TAG Heuer. Since then, he has gradually proven his ability, achieving many remarkable achievements.

The CEO of TAG Heuer is someone who always dedicates himself to achieving the set goals. The young man is fully aware of the importance of proving himself in the LVMH empire. He always works to the best of his ability to be worthy of the position of a leader, leading all employees to develop together.

Frédéric Arnault first became acquainted with the luxury brand TAG Heuer when he was 11 years old and received the TAG Heuer Aquaracer from his father. His father bought the company in 1999 and since then it has become LVMH’s most important watch brand. 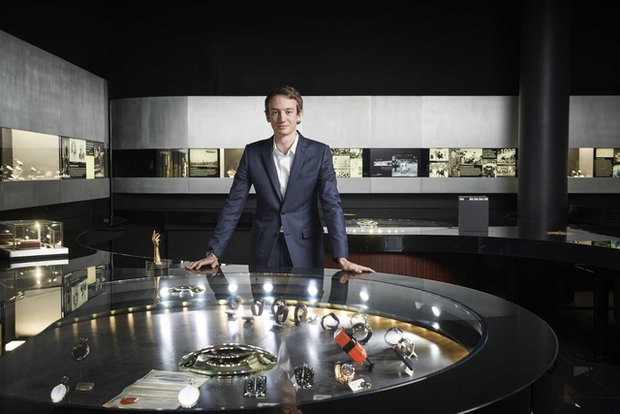 At the age of 25, he was appointed CEO of TAG Heuer. While heavily focused on connected watches, Frédéric’s main focus is on e-commerce, which has grown 329% in 2020. Also thanks to Frédéric, TAG Heuer has an important partnership with Porsche.

In the world of luxury, the unique iconic bond between Porsche and TAG Heuer has been smoldering for more than half a century, extending through the golden age of motorsport. However, until recently, the birth of the new TAG Heuer Carrera Porsche Chronograph officially marked the “predestined relationship” of these two hundred-year-old brands.

This masterpiece retains the character of a Carrera watch with a handy 44mm steel case and signature bezel. However, it is added with special attractive points that bring the unmistakable “soul” of the Porsche sports car line. It is a clock face with a texture with an asphalt effect, to refer to the surface of the road that the supercars have run through. 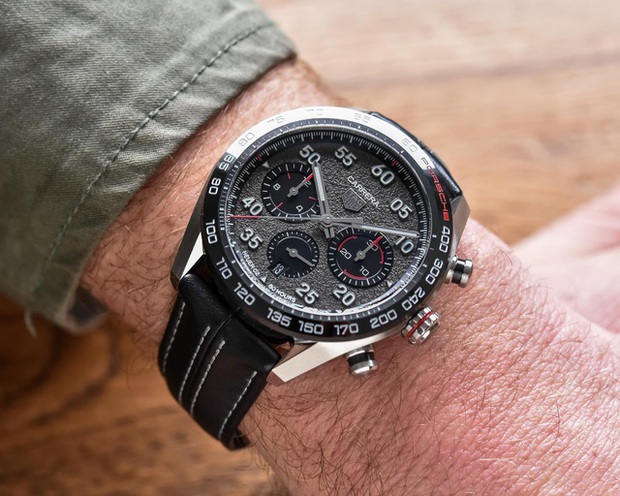 “With this partnership, Porsche and TAG Heuer are finally together after decades of intimacy,” said TAG Heuer CEO Frédéric Arnault. “Together, we will create new products that deliver unprecedented experiences to customers and enthusiasts of both our brands.”

In 2020, Frédéric gained a lot of attention for TAU Heuer when he named Hollywood actor Ryan Gosling as a brand ambassador. This is the Golden Globe winner’s first contract with a certain brand or product. Before that, the Hollywood superstar was not even present on social networks.

With sharp intelligence, after many conversations with Ryan Gosling lasting for a year and a half, Frédéric recognized an opportunity and quickly seized it. In the end, he successfully signed a two-year contract with Ryan Gosling. Ryan Gosling recounts the process, “He said he wasn’t just looking for an influencer. The TAG Heuer is a watch for those who will achieve success, not those who have already achieved it. Let’s keep looking for higher, farther goals and conquer it together.” That’s what makes the Golden Globes so impressive.

“TAG Heuer has stood silently as a classic pillar and symbol of excellence in its field for more than one hundred and sixty years. Partnering with them is a completely worthwhile decision,” Gosling said.

The actor La La Land also said, “The meaning behind the watch is the time, which is the factor that bothers me the most at the moment. My children are growing fast every day. It made me see watches in a way that I never did before.” 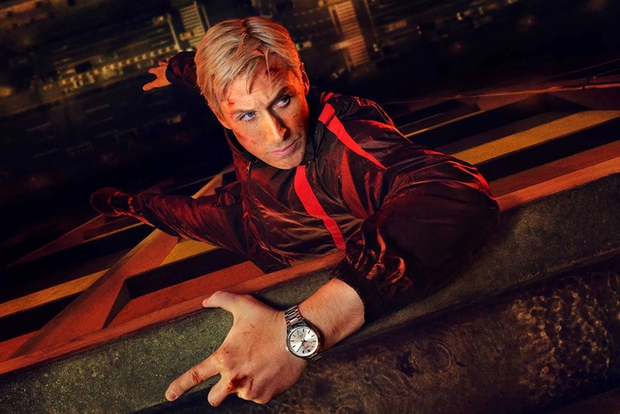 TAG Heuer Carrera collaborates with Ryan Gosling and the film “The Gray Man”.

Describing the uniqueness of Ryan Gosling and his position as a brand ambassador, TAG Heuer CEO Frédéric Arnault commented: “Ryan Gosling is an icon of greatness. He constantly challenges himself to push his limits.”

This 1-0-2 partnership becomes a factor in TAG Heuer’s strong growth, contributing to LVMH revenue reaching a record 64.2 billion euros in 2021, up 44% compared to 2020 and increasing. 20% compared to 2019. The world’s leading luxury group highlighted a “strong recovery” in the watch and jewelry segment, according to Europastar.

The young director likes to take advantage of his time outside of work and spend it with his loved ones. He plays the piano just like his concert pianist’s mother, Hélène Mercier-Arnault.

Many people believe that the succession war can push this family into turbulence, causing the members to “turn” against each other. However, Frédéric was very close to his two brothers, Alexandre and Jean Arnault.

The trio often appear together on vacations and outings, participating in luxurious gatherings of friends. While Frédéric’s brother Jean is a private person and does not like to reveal details of his personal life to the public, Frédéric regularly posts pictures of them on Instagram.

In his spare time, he also regularly plays chess with his billionaire father, or hits tennis balls with professional players including Roger Federer and Félix Auger-Aliassime. 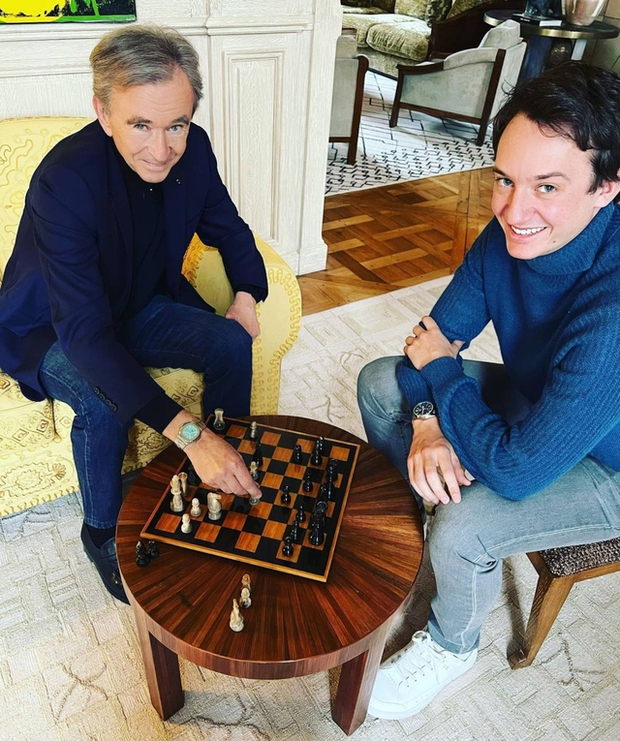