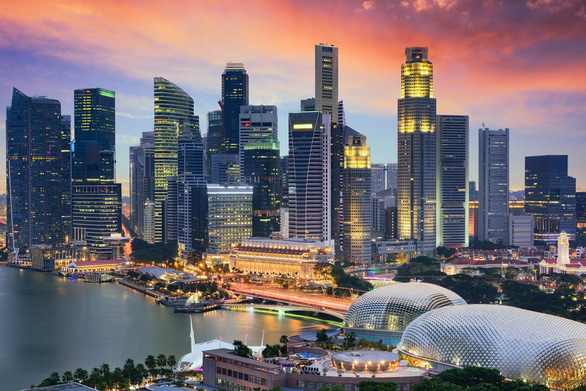 Southeast Asia will be the center of investment capital from the PGII initiative. In the picture is the infrastructure in Singapore – Photo: Bangkok Post

In a statement from the White House on June 26, US President Joe Biden said that the summit of the world’s leading industrialized countries (G7) in Madrid had unanimously approved an agreement on grassroots investment. new infrastructure PGII.

This is an updated version of the “Rebuilding a Better World” (B3W) initiative announced at the G7 Summit last year.

Accordingly, the US and G7 countries will mobilize US$200 billion in investment budgets in global infrastructure projects in low- and middle-income countries over the next five years. The overall goal of the project is to attract $600 billion by 2027.

Southeast Asian countries are expected to be the center of attracting investment capital of the PGII initiative. In which, SubCom telecommunications company, based in New Yersey state (USA), invested 600 million USD to build 6 undersea telecommunication cables with a total length of 17,000km.

This is a cable route that helps to quickly connect the information network between Southeast Asia, the Middle East and Western Europe.

The United States Agency for International Development (USAID) will invest 40 million USD in building electricity networks among Southeast Asian countries with the goal of reducing carbon consumption, developing a clean energy model and increasing trade flows. energy for the region.

“It doesn’t make much sense in the short term but it makes more sense in the long term. Southeast Asian countries will benefit from these new projects of the US and G7 partners,” said economist David Riedel. , founder of the consulting organization Riedel Research Group, told CNBC on June 28.

Compared to the B3W initiative, the biggest difference of the PGII project is the emerging issues such as energy security, health security and the change of goal from a digital technology platform to digital connectivity. number.

Experts Fikry A. Rahman and Abdul Razak Ahmad at the Bait Al Amanah Institute for Foreign Relations Studies (Malaysia) told The Diplomat: “The PGII initiative represents a strategic move by the US and its G7 allies. to fill the gap in the global infrastructure investment shortfall created by the COVID-19 pandemic and the Russia-Ukraine conflict.”

PGII is not intended to provide an alternative to China’s estimated $1 trillion in hard infrastructure investment around the world over the past decade.

Choi Shing Kwok, executive director of the Singapore-based ISEAS – Yusof Ishak Research Institute, said: “It remains questionable whether at this initial stage the scale of the PGII initiative can compete with the initiative. “Belt and Road” initiated by China or not?

According to experts, the approach of the PGII initiative is different from the “Belt and Road” initiative. It is using limited official investment capital to promote and encourage more private capital.

The US and G7 countries believe that the goals of the PGII initiative are results from reality. Southeast Asian countries will see the practical and long-term benefits of projects to participate more actively.

The principles of the PGII initiative are similar to the previous B3W version. These are the orientations of global commitment, high standards and transparency. This is different from China’s BRI initiative, which risks creating “debt traps” and quality and environmental concerns in the countries receiving the funds from the project.

China’s BRI initiative has been rolled out in most Southeast Asian countries. Therefore, PGII should aim to supplement the initiatives proposed by the host country itself, and at the same time it should fill in the gaps in infrastructure in these countries.

Beyond that, any project of this size has its own internal challenges. That is the gap in development level between countries, geographical distance between the US, G7 partner countries and Southeast Asia.

Investment projects in the PGII initiative can create greater inequality across countries, if implementation is not properly managed.

According to the Organization for Economic Cooperation and Development, Asia will need about $26 trillion to invest in infrastructure construction, including green projects, by 2030.

TTO – On June 28, the G7 issued a statement calling on partners with large food reserves as well as private businesses to sell food without distorting the market and contribute $ 4.5 billion to help improve food production. against global hunger.