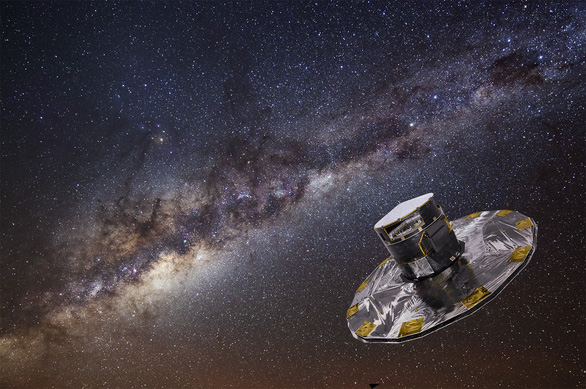 According to CNN, ESA has released the third batch of data from the Gaia observation satellite, which reveals new details about the nearly 2 billion stars in our galaxy (the Milky Way).

“Starquake tells us a lot about stars, especially their inner workings,” explains Conny Aerts, professor at the Institute of Astronomy at KU Leuven University in Belgium.

The ESA has described the stellar vibrations detected by Gaia as “large-scale tsunamis” that change the shapes of stars.

Gaia was not originally designed to detect this phenomenon, but can detect intense motions on the surfaces of thousands of stars, including some that have previously rarely been observed starquakes.

The Gaia Space Observatory, launched into space in 2013, is tasked with “mapping the most complete and accurate multi-dimensional map of the Milky Way”.

In the past, Gaia has detected radial oscillations (vibrations spreading from a common point) that cause some stars to periodically swell and contract while preserving their spherical shape. But the newly discovered oscillations are not radial.

Gaia is located about 1.5 million km from Earth and in the opposite direction to the Sun. ESA’s observatory is equipped with two telescopes that can scan our galaxy from a location called the L2 point. This is a favorable position to help Gaia unobstructed view so that it can continuously scan our galaxy.

“With this incredible database, we can get a complete picture of the Milky Way and dive into its incredible history,” said Nicholas Walton, a researcher at the National Institute of Astronomy. literature from the University of Cambridge, confidently asserted.

The data collected by Gaia includes new information on the chemical composition, temperature, mass and age of the stars, as well as the speed at which they are moving toward or away from Earth.