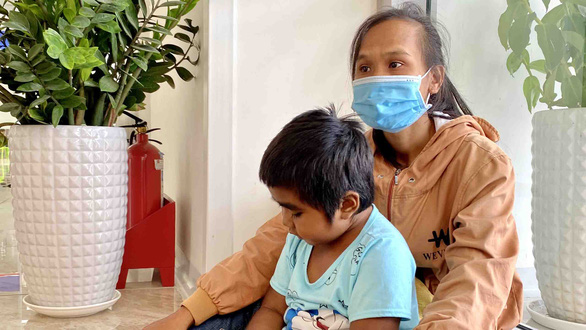 Khanh Diem and his parents rode a motorbike from Ninh Thuan to Ho Chi Minh City to receive blood transfusions from the age of 6 months – Photo: DIEU QUE

Two summers have passed, Tri Nguyen has been no longer eager to wait for summer vacation since suffering from a terrible disease.

Truong Nguyen Tri Nguyen (born in 2006, from Phu Tan district, An Giang) was found to have blood cancer from April 2021.

I went to the doctor near my house but couldn’t find the disease, went to the district level to have a blood test for high white blood cells, then transferred to the Hospital of Blood Transfusion – Hematology Ho Chi Minh City to be hospitalized.

I didn’t know that when I went to school last year, my friends learned online, if I did, I would have registered.

Children’s clothes instead of school clothes

Tri Nguyen had to officially leave school while preparing for the second semester exam of grade 9 to focus on treatment according to the protocol. In the days that followed, I was continuously hospitalized, returned home for a week, and returned to the city for chemotherapy for half a month. Ngoc Thia – my mother – also gave up all her work to accompany her son to heal.

“It’s a lot to be able to go home every time for 10 meals. The COVID-19 outbreak last year, mother and daughter were always in the hospital because there was no bus to return home, and at that time the epidemic was so bad that they did not dare to return.” , Thia said.

At the hospital, Tri Nguyen was a bit scared at first because most of the people in the room were bald. “Until now, I still don’t dare to tell my son the truth for fear that he will be sad, just saying that he has severe anemia, but just listen to the doctor and the disease will be cured. I say this to keep my child’s spirit optimistic. give it to me,” she confided.

Tri Nguyen is a quiet person, sometimes she plays with some young people in the same room. The mother’s eyes were red, telling her son to get well soon and go back to school, but honestly she also knows that the day when the child can go back to school with his bag is still a long way off…

Like Tri Nguyen, little Trinh Gia Nhu (District 5, Ho Chi Minh City) also left the class two years ago because she went to the hospital all the time and couldn’t keep up with her homework. Gia Nhu got sick when she was only 6 months old, when she was 2 years old, her mother died, a few years later her brother died from drowning. Like living with my father and grandfather in a shack.

17 years old, but blood cancer makes Nhu thin and pale, looking like 12-13 years old. Recently, the spleen has enlarged, causing my abdomen to swell and throb. “With both anemia and excess iron, if you have an excess of iron in blood, you have to excrete iron, if you can’t, your spleen will swell,” said Trinh Xuan Hien – Nhu’s father.

“The doctor said that when the bulge gets bigger, the blood transfusion can’t be anymore, I have to have surgery,” Nhu said and said that she understood 50% of her disease after researching online. Since the day his son was sick, he could not continue to work as a driver, Mr. Hien switched to freelance, everyone hired to do whatever, so it was even more difficult even though there were some benefactors to support.

Twice a month, sometimes three times, the father and son pass each other from home to the hospital in Binh Chanh district for blood transfusion. “Excluding gas and food costs, each blood transfusion and medicine collection is more than 2 million dong,” Mr. Hien lamented.

But the most miserable is probably the situation of the 5-year-old girl Bach Nu Khanh Diem (from Thuan Nam district, Ninh Thuan). Diem has suffered from idiopathic bone marrow failure since the age of 6 months. My childhood was associated with motorbike trips with my parents from the countryside to Saigon for medical treatment. Every time the platelets are low, Diem bleeds, bleeding gums, blood clots, bruised limbs and she also loses her appetite.

Having no money to travel by bus, once a month, Diem rides a motorbike for 8 hours with her parents from the countryside to the hospital. Both husband and wife are hired workers, so every time they send their children to a blood transfusion, they have to beg or borrow everywhere. After the examination, they rushed back and did not dare to find a place to stay for the night because they did not have enough money.

“Come here for a blood transfusion for 3 hours, platelets for an hour and a half, the hospital will support part of the cost. If you have money, you can get a bone marrow transplant, if you don’t have money, you have to go for life treatment”, Mr. Dang – Ba Diem – speak.

Wish on the hospital bed

This summer, when our friends in the countryside were enjoying the first summer vacation of their high school year, the 16-year-old boy was still at the hospital. Tri Nguyen has just finished the last course of chemotherapy, expected this last round to be done in three weeks, but now it’s been almost a month.

“When the drug is injected, the white blood cells will decline, I’ve been here for almost a month, but my white blood cells have not come back up. Having completed the 5 regimens, after this round, I will have a marrow aspiration to see if there is a response to the drug, and then once a month for a check-up within 24 months”, Ms. Thia said.

The disease often makes her anorexic, tired, when she is not tormented by illness, Nhu is very optimistic and always yearns for one day she will get better. “I like cooking very much, in the future, if I’m healthy, I’ll cook. I don’t cook much because the house is tight and I’m tired every time I finish it,” Nhu confided.

Khanh Diem often asks his mother to send him to school. Diem was very bold, the day he met at the hospital, after preparing to return home, Diem sat on his mother’s lap innocently smiling at strangers, then took us by the hand and walked to the door as if he wanted to invite us to go home with him. At that time, I saw her mother’s eyes were red…

Online learning in a field hospital

TTO – Patients take cardboard to make copies of their homework, go to a stone bench in the yard or a corner of the hallway to “make some waves”, doctors both treat diseases and guide online learning… There are also girls and boys who study. I had to quit because I didn’t have a school phone…