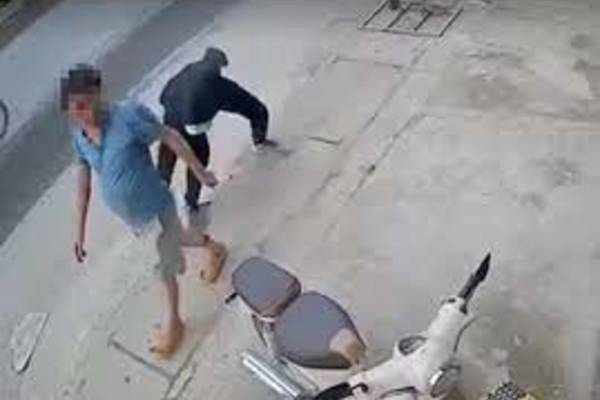 Image of the victim being slashed

The suspect slashed Mr. H’s leg with a knife and then left. The incident caused Mr. H. to cut off his right leg. People then took the victim to the emergency room. The incident was recorded by the surveillance camera of the house and someone posted the clip on social networks.

Talking to PV Infonet, lawyer Nguyen Anh Thom (Head of Nguyen Anh Law Office, Hanoi Bar Association) said the case from a legal perspective is as follows: “Citizens’ lives and health are protected by the law. protection law. All acts of infringing upon the right to health and life protection shall be strictly handled according to the provisions of law.

Through the progress of the surveillance camera recorded, the suspect prepared a very dangerous weapon, a knife, and then approached behind the victim, suddenly slashing a quick and decisive slash at the victim’s leg. As a result, the victim’s right leg was severed. The victim was in great pain, writhing on the sidewalk and was taken to the emergency room by everyone.

Considering the suspect’s behavior is very violent, violent thugs, infringing on the victim’s life and health, has constituted the crime of intentionally causing injury as prescribed in Article 134 of the Penal Code. The results of the assessment of the victim’s injury rate are the basis for handling the corresponding suspect according to the aggravating framework.

The suspect’s behavior is very dangerous for society, directly infringing on the highest object of life, human health, so it is necessary to handle it seriously to have a deterrent effect. violence to resolve conflicts.

According to lawyer Thom, on April 6, 2016, the Judges’ Council of the Supreme People’s Court issued Case precedent 01/2016/AL on the case of “Murder” to distinguish it from the crime of Intentional Injury. Accordingly, if you attack the legs and arms but do not attack the vital parts of the body, which are positions that, if attacked, will be more likely to harm the victim’s life, it will be a crime. Crime of Intentional Injury.

Compared with the provisions of this Case Law 01, in this case, the suspect will face the crime of Intentionally causing injury according to the provisions of Article 134 of the Penal Code, even if the victim dies due to the wound. severed leg artery injury.