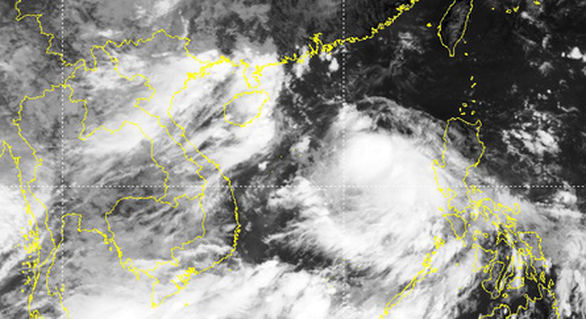 The low pressure area at about 15.5-16.5 degrees north latitude, 117.5-118.5 degrees east longitude is likely to strengthen into a tropical depression – Photo: NCHMF

It is forecasted that in the next 24 hours, the low pressure area will move slowly to the northwest and continue to get stronger.

In the southern part of the East Sea (including the waters of the Truong Sa archipelago), the sea from Binh Thuan to Ca Mau has strong southwesterly winds of level 5, sometimes level 6, gusts of level 7, rough seas. Waves are 2-3m high.

The area south of the East Sea (including the waters of the Truong Sa archipelago), the sea from Binh Thuan to Ca Mau, Ca Mau to Kien Giang and the Gulf of Thailand has showers and thunderstorms. During thunderstorms, there is a possibility of tornadoes and strong gusts of 7.

Warning in the next 1-2 days, the low pressure area is likely to develop into a tropical depression.

Today and tonight, the Northern region, Thanh Hoa and Nghe An have moderate rain, heavy rain, very heavy rain in places with common rainfall of 40-80mm, in some places over 100mm.

Day and night tomorrow (August 7), the Northern region, Thanh Hoa and Nghe An have moderate rain, heavy rain with a common rainfall of 30-60mm, some places over 80mm.

From now to August 7, there will be showers and thunderstorms in Hanoi area, with heavy rain locally.

In the next few days, the Central Highlands and the South will have showers and thunderstorms, with heavy rain in the afternoon and evening with rainfall from 20-40mm/24h, some places over 50mm/24h.

Mr. Ta Cong Huy, chief of the office of the Commanding Committee for Natural Disaster Prevention and Search and Rescue in Lao Cai Province, said floods on the night of 4am to 5th August in the province left 1 dead and 1 missing.

Accordingly, at about 8pm on August 4, Mr. Tran Van T. (56 years old, in Sa Pa ward, Sa Pa town) took a passenger along the provincial road 152 towards Ta Thang and lost contact with his family. .

The People’s Committee of Muong Bo Commune coordinated with the family to organize a search force until 11:30 a.m. on August 5 to find the victim at the Nam Flat stream spillway, Nam Lang village, Muong Bo commune, Sa Pa.

In addition, there is one person injured by lightning, Mr. Chao Lao T. (32 years old, in Tong Sanh commune, Bat Xat district), currently being treated at a health station, his health is stable.

Heavy rain and thunderstorms also affected 661 houses, damaged them by flooding, and blown roofs off (Lao Cai city: 239; Sa Pa district: 413; Bat Xat district: 9). A school in Thanh Binh commune, Sa Pa town had its roof torn off. About 70ha of rice, maize, cassava, banana and other crops were damaged or affected.