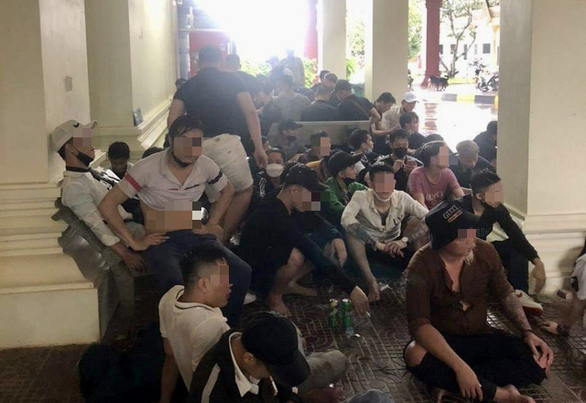 Many people who escaped are being detained at the Cambodian border gate on September 17 – Photo: TUAN MINH

According to information from the Vietnamese Embassy in Cambodia, as of 14:30 on September 17, it has been confirmed that 60 Vietnamese people fled from a business establishment in Bavet Kandal hamlet, Bavet ward, Bavet city, Svay province. Rieng towards Bavet border gate, trade with Moc Bai border gate in Tay Ninh.

The Vietnamese Ministry of Foreign Affairs said that during the process of this group of people fleeing, four people were caught by business establishments.

Vietnam has contacted Cambodian authorities to find out about the case, verify identity, carry out procedures to receive and send people home, and request the Cambodian side to intervene and rescue the remaining people. .

By the late afternoon of September 17, Cambodian police asked the company to hand over 11 more Vietnamese citizens, bringing the total number of people involved in the case to 67. Currently, the citizens are being protected by Cambodian police and taking statements.

The Ministry of Foreign Affairs has also directed the Vietnamese Embassy in Cambodia to ensure adequate living conditions for citizens while waiting for procedures to return home.

The Vietnamese side will also continue to coordinate with local authorities to review the possibility that Vietnamese citizens are still at the facility, request investigation of the cause and handle the case, and protect their legitimate rights and interests. citizen law.

Citizens who need assistance, people can contact the relevant agencies of the Ministry of Foreign Affairs:

“According to initial information, this group of people said that there was a conflict with the owner, so they asked each other to run away. Currently, the authorities of Tay Ninh and Cambodia are carrying out relevant procedures to bring these people home soon. as possible,” said Mr. Ngoc.