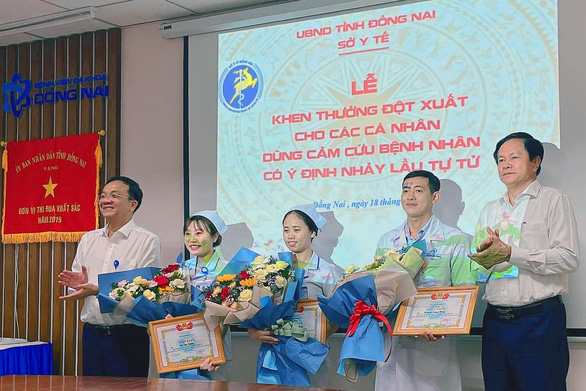 Doctor Huynh Phuc Hung and 2 nurses Ho Thi Trang and Nguyen Thu Huyen received an unexpected certificate of merit from the Dong Nai Department of Health for their brave action to save lives – Photo: BA

On July 18, the Dong Nai Department of Health coordinated with Dong Nai General Hospital to award unexpected certificates of merit to three individuals for their brave actions to save a patient intending to commit suicide.

At the ceremony, Mr. Nguyen Van Binh – deputy director of Dong Nai Department of Health – praised the brave actions of these three individuals. Through the awarding of compliments, Mr. Binh hopes that the medical profession will have more beautiful and meaningful actions, so that “good” spreads strongly in the community.

Before that, around 3:15 pm on 8-7, a 25-year-old male patient who was inpatient treatment at the gastroenterology department loudly argued with his wife in the 10th floor corridor. After a while, the male patient suddenly climbed over the high railing. about 1.4m standing on the edge of the railing with the intention of committing suicide.

At this time, two nurses nearby rushed to hold the patient’s hand tightly, preventing him from falling. At the same time, a doctor heard the screams and quickly ran to grab the patient’s collar and forcefully pulled it over the railing to bring him inside safely.

Recounting the incident, Ms. Trang said that while she was on duty at the nursing counter, she heard a loud voice coming from the hallway. At first, she thought the patient was talking on the phone, but then the argument got louder and more intense. Ms. Trang stood up and saw the male patient climbing over the railing.

Seeing that, Ms. Trang and Ms. Huyen hurriedly ran to hold the patient’s hand. At this point, the patient was standing on the edge of the railing, it was easy to fall down. “At that time, I didn’t think anything of it, when I saw the patient was about to commit suicide, I ran to keep it. At that time, I was very shaken, I was just afraid that he would fail,” Ms. Trang recalls.

Fortunately, just a moment later, Dr. Hung heard the shouting and promptly came to support, grabbed the patient’s shirt and pulled it into the safe corridor. At the same time, with family members to reassure and stabilize the patient’s spirit.

According to the leader of Dong Nai General Hospital, the unit has recorded many cases of patients, even outsiders entering the hospital to commit suicide. To prevent this situation, the hospital has installed a large net in the skylight area on the 3rd floor. However, if the patient falls from the 10th floor, it is also very dangerous.