Talk to reporters Tien Phong On the afternoon of November 16, a representative of Sewerage Enterprise No. 1 (Hanoi Drainage Company) said that the unit had recovered more than 1 quintal of dead fish in West Lake. “The number of dead fish is mainly small and medium-sized catfish, with some tilapia,” the representative of this unit informed.

According to this position, through the unit’s observations, recently, the amount of green algae in West Lake appeared a lot, which may be one of the causes of fish deaths.

“Semfish are species that live in the surface water layer, possibly due to the abundance of algae, which causes a lack of oxygen that causes the fish to die,” he added. 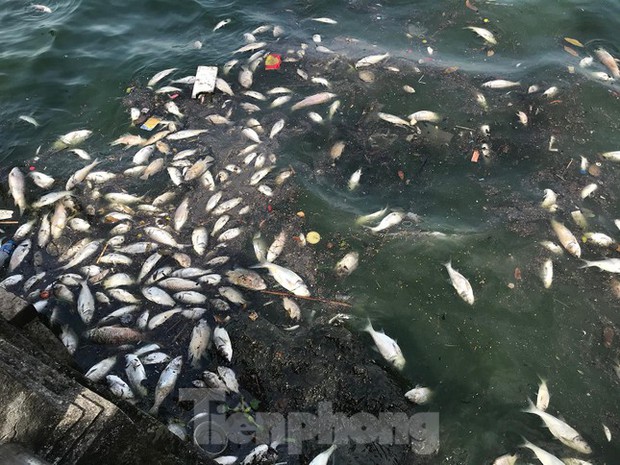 The state of dead fish in West Lake (Hanoi) has lasted from September 2022 to present. Photo: Truong Phong

Before, Tien Phong has repeatedly reflected the situation of dead fish floating in West Lake recently. According to the written confirmation of the Department of Construction, the state of dead fish has appeared since September 2022.

According to the announcement of the Department of Construction, the phenomenon of dead fish on the surface of West Lake began to appear from the end of September 2022. The number of dead fish sporadically dispersed on the lake at night and early morning drifted to the lakeside in the area of ​​Nguyen Dinh Thi, Trich Sai, Thanh Nien streets.

According to the inter-sectoral report, through monitoring of the maintenance and operation of West Lake water level for drainage, every year around September, October, when the weather changes, the phenomenon of fish deaths often occurs. on the inner lakes.

Regarding the lake water quality, according to the data of monitoring results at the automatic monitoring point of Trich Sai managed by the Department of Natural Resources and Environment, the dissolved oxygen (DO) parameter has changed continuously. Specifically, there is a sign of reduction starting from September 25 (DO is 3.6 mg/l); on September 26 was 0.46mg/l, on September 28 decreased to 0…

However, the parameter value until September 29 reached 4.54 mg/l, on October 6 reached 6.19 mg/l… (according to the National Technical Regulation on surface water quality QCVN, the price column B1 limit value for dissolved oxygen parameter is ≥ 4mg/l). Parameters: BOD, COD, TSS, Ammonium all exceed the allowed standards…

The report of passive monitoring results after conducting surveys around West Lake, taking samples to analyze the quality of West Lake water at 7 different locations in West Lake by the Department of Natural Resources and Environment recently also showed that the concentration Dissolved oxygen of 7/7 samples were all above the minimum allowable limit (≥ 4 mg/l) when concentrations fluctuated from 6.95 to 7.64 mg/l; 7/7 samples have 4/16 parameters of BOD, COD, Ammonium that are close to or exceed the allowable limit of the regulation. Particularly, the position of sluice gate through Truc Bach lake has additional parameters of total Coliforms exceeding the comparison standard 2 times (15,000/7,500).

According to preliminary comments of the interdisciplinary, the phenomenon of fish death due to many causes. Opinions of the Department of Natural Resources and Environment on the phenomenon of air shortage, reduced oxygen content; The opinion of the Department of Agriculture and Rural Development stated that the fish volume in the lake is high, the water quality is polluted, there are toxic gases (caused by mud, algae,…), diseased fish, …. Dead fish in the lake West needs to have more survey, take samples for more specific assessment.

Regarding solutions, the Department of Natural Resources and Environment is currently conducting a survey to collect samples to analyze water quality and will continue to monitor and evaluate the water quality of West Lake. The Department of Agriculture and Rural Development has researched and proposed a plan to reduce the density of fish in the lake and assess the status of diseased fish when mass fish deaths occur in lakes managed by the city. The Department of Construction continues to coordinate with the Departments of Natural Resources and Environment and Agriculture and Rural Development to monitor the water quality of the city’s lakes and report to the City People’s Committee when there are unusual developments.