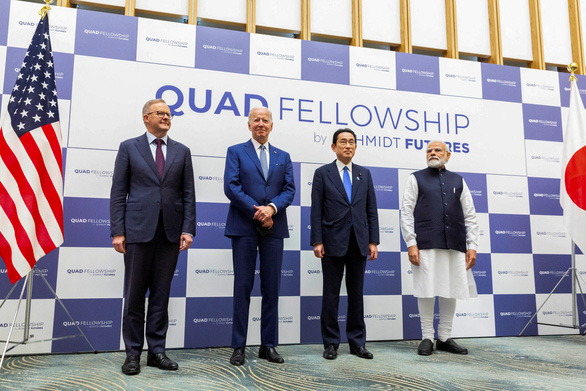 “US President Joe Biden, Indian Prime Minister Narendra Modi, Australian Prime Minister Anthony Albanese and I acknowledge that unilateral efforts to change the status quo by force will never be tolerated anywhere, especially especially in the Indo-Pacific region,” said Japanese Prime Minister Kishida Fumio and said that these four leaders shared concerns about the situation in Ukraine, according to AFP news agency.

“The four leaders candidly discussed the impact of the Ukraine situation on the Indo-Pacific region. We expressed concern about the war in Ukraine, and affirmed principles such as the rule of law. rights, sovereignty and territorial integrity should be observed in any area,” Kishida said.

Mr. Kishida csaid Japan, the US, India and Australia have plans to invest at least $50 billion in infrastructure projects in the region.

“In the infrastructure sector, we announced that we will aim to invest more than $50 billion over the next five years to support projects in the Indo-Pacific region,” Kishida said.

According to Kyodo News (Japan), this is the first time Japan has held a summit of the “Diamond Quadrilateral”. Kyodo said Japan is increasingly challenged by China’s territorial claims in the East China Sea and the North Korean nuclear and missile threat.

In a joint statement after the May 24 summit, the leaders of the QUAD group specifically mentioned “the militarization of the disputed features, the use of coast guard vessels and maritime militia forces.” dangerously, and attempts to disrupt the offshore resource extraction activities of other countries”.

According to AFP news agency, these are all activities that China is accused of carrying out in the region.

However, the joint statement of the leaders of the QUAD group avoids criticizing China or Russia explicitly.

“The Australian Government’s new priorities align with the QUAD agenda, act on climate change and build a stronger and more resilient Indo-Pacific,” said Mr Albanese. made such remarks at the opening of the QUAD summit in Tokyo on May 24.

According to Reuters news agency, the new Australian prime minister, who took office just a day earlier (May 23), said his government is committed to focusing more on Southeast Asia, and “take advantage of the geographical distance”. close” to strengthen defense and maritime partnerships in the Pacific.

The new Australian Prime Minister also affirmed that QUAD will “stand firm with its values ​​and beliefs” to strengthen the stability of the Indo-Pacific region.