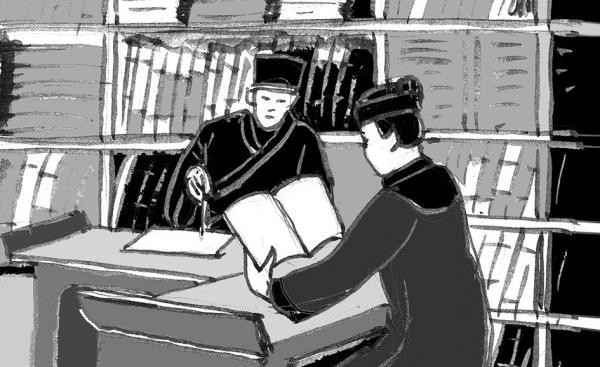 That story was recorded by two authors, Pham Dinh Ho and Nguyen An, in the memoirs “Tang Thuong Du Luc”, completed at the beginning of the reign of King Gia Long of the Nguyen Dynasty.

Nguyen Trac is a real person, according to later documents, he was born in 1573, from Nguyet Vien village, Hoang Hoa district (now in Hoang Quang commune, Thanh Hoa city), passed the doctorate exam in Quy Hoi exam ( 1623) under King Le Than Tong.

According to the legendary colorful story in “Mang Thuong Thap Luc”, when he was young, Nguyen Trac passed the Huong department exam and then dropped out of school for a long time, not looking at books anymore.

After thanks to the grace of hosting a feng shui master, he wanted to donate a land to develop a doctorate, but he thanked him, saying: “Whoever does not want to be rich, but I have dropped out of school for a long time, I don’t dare to hope anymore. that again”. However, after being given the land, Nguyen Trat was also reluctant to follow the geography teacher’s words and went to the capital to attend the contest.

In the days of preparing to enter the exam school, he and a few acquaintances shared a house; entered the first school, the second school, thanks to help, won. In the third school, he picked up a piece of paper, which he copied correctly.

A few days before arriving at school on Wednesday, his roommates all went out to get money to buy things to go to school, he stayed at the boarding house to sleep during the day, dreamed that a god said a few words: “Kuong! Khuong!” . When he woke up, he thought: “Kuong must be ginger!”.

On the day he entered school, he brought ginger with him. At that time, in the cold spring weather, he was at school, lighting a fire to boil water to keep warm. In the evening, next to a contestant, who was struggling with pain in her stomach, was a fellow student born in Bot Thai village.

He boiled ginger water to drink. According to this story, in the exam school, the candidates have to take care of themselves, from food to medicine. The proctors and the patrol officers only had to keep order, not allowing the contestants to run from one tent to the other, asking each other’s questions.

Thanks to Nguyen Trat’s care, that fellow soldier regained consciousness, took out a book of literature and said: “It’s my favorite essay, but it’s not yet named, please pay it back. I hope you carry it out. out of school, even if you die, you won’t have to worry about it anymore.” He followed the word. Out of school, the student born to Mo fell ill again and died.

After that, he won the contest, causing an uproar in the capital’s public opinion. The disclosure. The imperial court dismissed the family exam. According to history books, after this forgery case was discovered, the court canceled the communal exam, then let the winners according to the Hoi table return to the honor, not having their names listed on the gold board.

Another legend says that in the Dinh exam, each candidate has to do 7 books of literature. In the 7th book, Nguyen Trac could not do the test, so he gave up the blank paper and submitted it. Thinking that Nguyen Trac was proud, he submitted a blank paper, the court was very angry and planned not to hang a yellow board for him to pass.

However, at that time, in the court, there was a change, Lord Trinh Tung was seriously ill, so he gave power to his eldest son, Trinh Trang. Another son of the Lord, Trinh Xuan, brought his army to fight for power with his brother, the battle caused chaos in the capital, Trinh Trang hastily brought King Le Than Tong to Thanh Hoa.

Regarding this incident, the epitaph with the name of a doctor in the Quy Hoi exam (1623) at the Temple of Literature, Hanoi (according to the translation of the Institute of Han Nom Studies) hinted that: “By the summer of June, In the face of lightning, rain, and wind, the martial arts officials temporarily carried the cross to return to their homeland to strengthen the foundation and harmonize the people’s hearts so that the country could become greater and brighter.

During the chaos, Nguyen Trac had great merit when he helped the king to return to Thanh Hoa, so then the punishment was ignored. In the end, he was still awarded a doctorate.

Due to historical upheavals, the stele of the 1623 examination was not erected until 1653. Because the stele was erected 30 years after the exam, the events that were recorded were sometimes corrected, or because Nguyen Trac was a great official in the court, the problem was also mitigated.

However, the epitaph also describes in detail the details of that year’s exam: “Domestic scholastics participated in the contest with more than 3,000 people, choosing the excellent 7 people. On a good day in April, summer, Hoang Thuong stayed at the door of Kinh Thien Palace, publishing articles and books in the dragon yard.While the students were doing their homework, suddenly Nguyen Trat wrote the essay in a slightly wrong format, so only 6 books were reviewed.

The company owners offered the book to read. The Emperor reigned, married Phung The Trung as the first, and the remaining 6 people all passed the bronze doctor. And according to the old rules, those who were allowed to enter the Dinh exam were not disqualified, so they still let Nguyen Trat pass at the bottom of the table, all 7 people. Because of that, prolonging the list of names, even the granting of hats, banquets and honors have not been done according to the old rules. At that time, all the wise men in the country were upset in their hearts.”

Thus, the fact that Nguyen Trac was not approved for the 7th exam book is real, and anecdotes saying that he “abandoned the papers and did not submit” are probably just fabrications.

Because, the epitaph of this doctorate faculty commented on the talents of those who passed that course: “Let’s consider this one faculty. Those who come from this faculty are all brilliant, profoundly talented scholars. There are people who keep the public affairs and manage to correct the government, some people in low positions but discuss rightly and rightly, some people only keep the military affairs and plan strategies, some people hold the reins and follow closely. follow the throat.

Those who are well-educated, talented, erudite, brilliant and handsome, their literature is famous in the world, but their careers are brilliant in life, don’t they have anything to remember and feel?”. The descriptive essay “someone holds the reins of a horse and follows closely” to describe Nguyen Trat’s success, may it also make sense?

Because this exam exam at that time did not hang a yellow board, so the king ordered the doctor’s name to be copied into the “Dang Khoa Luc” book according to the rules of the Association, and hung the yellow board in Quang Van communal house to write his name.

Later, Nguyen Trac worked as an official of the Department of Science and Technology. Although he is not famous for literature, he has a love for the people, is a very honest mandarin, and the people love and call him Quan Nghe Nguyet Vien.