In a press conference on September 21, US Federal Reserve Chairman Jerome Powell acknowledged that what many economists have forecast for months is that a “soft landing target” is increasingly unlikely. with the US economy. A “soft landing” is finding ways to slow down economic growth enough to curb inflation but not too much to avoid a recession.

According to the AP news agency, Powell said that Fed policymakers only consider stopping raising rates when inflation falls back to the 2% target. These comments were made after the Fed on September 21 raised interest rates by 0.75 percentage points. In an effort to reduce inflation, which is near its highest level since the early 1980s, the Fed raised the federal funds rate to a range of 3%-3.25%, the highest level since early 2008, after the third time. consecutively increased interest rates by 0.75 percentage points. Fed officials forecast more large-scale hikes, raising interest rates to about 4.4% by the end of the year, higher than previously forecast. That figure is expected to rise to 4.6% in 2023, which would be the highest level since 2007. According to Reuters, Fed officials also forecast a sharp drop in US economic growth to zero. 2% this year but will reach 1.2% next year. The unemployment rate is forecast to rise to 4.4% next year, from 3.8% currently. 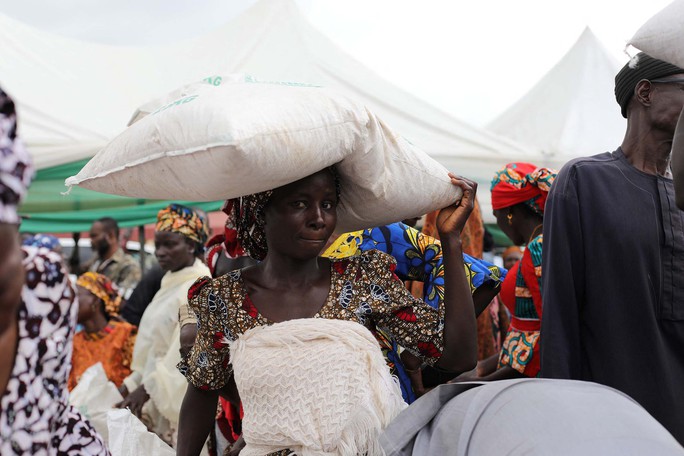 People receive food bags from the government as the cost of living rises in the capital Abuja – Nigeria on September 20 Photo: REUTERS

Roberto Perli, an economist at Investment Bank Piper Sandler (USA), said: “The Fed’s forecast is like a tacit acknowledgment of the risk of a recession.” A day after the Fed’s announcement, Norway’s central bank raised interest rates to 2.25% from 1.75% and said it plans to raise rates further at the end of the year. The Swiss National Bank (SNB) also raised interest rates by 0.75 percentage points – the second increase in 15 years – and does not rule out the possibility of further increases in the context of other central banks tightening their policies. monetary policy to prevent price escalation. Saudi Arabia and Bahrain raised interest rates by 0.75 percentage points while Qatar, the United Arab Emirates (UAE) and the UK simultaneously announced a suitable increase on September 22.

In Asia, the Philippines and Indonesia also raised interest rates to curb inflation. Meanwhile, shortly after the Bank of Japan (BOJ) announced to maintain extremely low interest rates, the yen fell sharply against the dollar, to the lowest level in 24 years with 1 USD for 145 yen. Exchange rate between USD and other currencies from AUD (Australia), NZD (New Zealand) to yuan (China), won (Korea), as well as SGD (Singapore) and baht ( Thailand) also recorded a new high on September 22 (local time). On the same day, the American, European and Asian stock markets all recorded a decline after the Fed’s statement. The opposite is the price of oil, when the price of Brent oil sometimes increased to $ 90.24 / barrel and the price of WTI oil also increased to $ 83.3 / barrel. Particularly, the world gold price decreased when trading around USD 1,674/ounce.

The head of the International Monetary Fund (IMF) Kristalina Georgieva warned that “there will be many people wandering the streets” if governments do not act to protect the most vulnerable groups from inflation. Georgieva told CNN that central banks around the world “have no choice” but to raise interest rates in an effort to combat inflation.