On September 26, the People’s Court of Ho Chi Minh City opened the first-instance trial of Huynh Quang Dat (born in 1966, living in Ho Chi Minh City) on the charge of “Murder”. The Procuracy prosecutes this person in a sentence of 7-15 years in prison.

The indictment shows that Mr. Dat has a wife, Mrs. U. (SN 1968) who was seriously ill and was being treated at the Hospital for Rehabilitation and Treatment of Occupational Diseases (HCMC). Lying in the same room as Mr. Dat’s wife is a patient without consciousness.

More than 7 o’clock on 4-11-2021, Mr. Dat bought an electric cord, gave Mrs. U. one end, and plugged the other end into an electrical outlet. About 4 seconds, Mr. Dat saw Mrs. U lying still, so he removed the power plug from the socket, tied the two ends of the cord to his wrist, and then held the power plug attached to the socket for about 5 minutes to commit suicide. This man repeated about 5 times but did not die. 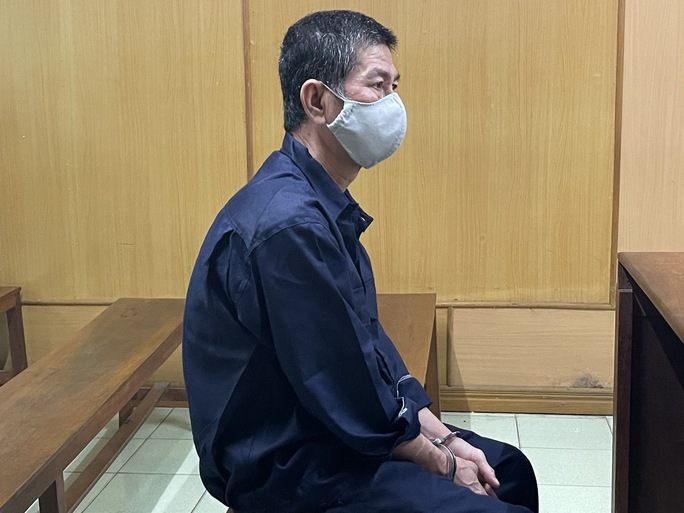 Defendant Dat at the trial.

At this time, the person taking care of the patient in the same room as he went to pay the hospital fee, saw that he should call out, cut off the circuit breaker, broke the door to save Mr. Dat.

According to the conclusion of the forensic examination of the Forensic Center (Ho Chi Minh City Department of Health), Ms. U. died due to electric shock.

In court, the jury asked Mr. Dat to report the case again. The defendant confessed that he and his wife had planned to die together.

Mr. Dat said that in 2006, his wife had a serious accident and was no longer able to work while the couple’s only son was 8 years old. He worked as a carpenter but often had to take time off work to take care of his wife and children, so his employer fired him. Mr. Dat turned to a small business to earn money to support his family and his father-in-law (SN 1940) lost a leg.

Life went on like that until the Covid-19 epidemic hit, his whole family was infected, each person was taken to isolation in each place. Some time later, the isolation ward where his wife lay informed him to take her home for physical therapy because she was paralyzed in both legs and her arms were very weak. After contracting Covid-19, Mrs. U. also had to undergo dialysis to save her life.

During nearly 4 days in the hospital for physical therapy after Covid-19, Mr. Dat paid more than 10 million VND, which is the entire amount of money he has accumulated plus the family money on both sides of the family.

He just took care of his wife and encouraged her: “I’m happy for you to be healthy, but I’m so miserable.” Mrs. U. often asked to die to relieve her pain. Once, a husband and wife crossed their arms and promised to die together to free themselves from suffering.

On the morning of the incident, he bought breakfast, but his wife didn’t eat and kept blaming him for not fulfilling his promise to die together, so he did it.

At the court, Mr. Dat’s son hoped that the court would consider and reduce the punishment so that his father could return to his family soon. The accused’s son said: “The story of my mother’s death, but my father is still alive, my father does not want it. My father wanted to be freed with his mother. Over the past 15 years, his father has struggled to feed me, study, and take care of his sick mother and grandfather alone. foreign war invalids, but his father has fulfilled his responsibilities well, without complaining. I hope the jury will consider that he will return to his family soon, with his elderly and frail grandfather, every day grandma will take care of his father’s return.”

The defendant’s lawyer said that the local government where Mr. Dat lived confirmed that his family was in a difficult situation. In particular, the people of the neighborhood where Mr. Dat’s family lived for many years, although not related to the case, made a letter to ask the jury to consider and reduce his criminal liability because of pity for the defendant’s family situation. . The lawyer said this is a very rare thing in a case of fatal consequences, which partly shows the personality of the accused.

Regarding Mr. Dat’s crime, the jury found that the defendant was the one who directly held the power plug, causing the victim to be electrocuted to death. Considering the case, the court sentenced the defendant to the lowest level of the penalty frame of 7 years in prison for the crime of “Murder”.