Accordingly, the accident happened at about 9am on October 1 on DT743 road, the section through Binh Hoa ward, Thuan An city, Binh Duong province.

At that time, a container truck carrying BKS: 51C-986.63 circulated on DT743 road in the direction from Highway 13 to Di An city, when coming to the section of Cuu Long intersection, Binh Hoa ward, a security guard riding an electric bicycle in parallel. was startled, fell on the road died on the spot.

Before that, another accident happened at 2:30 am on the same day on DT743 road, section through Binh Hoa ward, Thuan An city, Binh Duong province.

At that time, a young man driving a motorbike with license plate number: 47C1-395.25 circulated on DT743 road in the direction from An Phu 6 intersection to Di An city. When the car ran to the section of Dong An 3 neighborhood, Binh Hoa ward, it hit the back of a container truck that was stopped on DT743 street. The impact caused the victim to fall, hit his head on the road, and died on the spot. 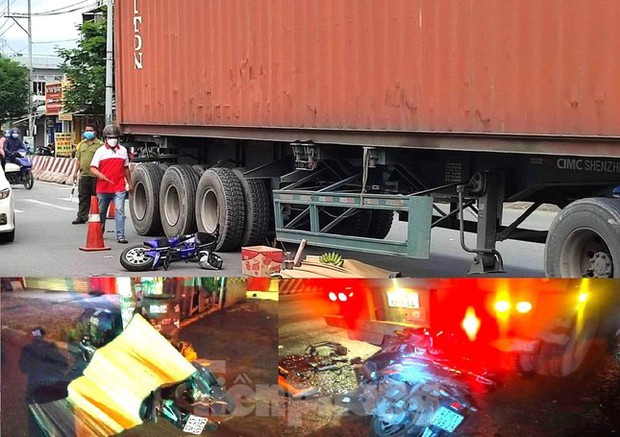 The scene of three accidents this morning in Binh Duong, killing 3 people on the spot

Also this morning, another traffic accident occurred at about 4 am also in Thuan An city (Binh Duong). At that time, a 25-year-old young man driving a motorbike with BKS: 62G1-452.95 circulated on Bui Thi Xuan street from Thuan An city to Thu Dau Mot city.

When coming to the section of An Phu ward, Thuan An city, Binh Duong province, the car lost control, suddenly crashed into a light pole on the sidewalk, close to the edge, causing the victim to die on the spot. After the accident, the motorcycle was badly damaged, the front end was plugged into the power pole, the victim’s body was lying next to the motorbike.

The cause of the three accidents is being investigated by the police.