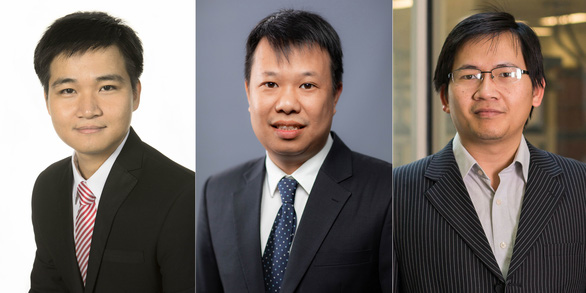 This is the handshake of three Vietnamese scientists currently working in different units in the country of the United States of America, as well as the continuation of the journey from the cooperation in the development of the 5G network system, the information grid. , artificial intelligence (AI) from earlier.

Professor Nguyen Ngoc Tu (Kennesaw State University) – project team leader – said that Vietnamese scientists realized that modernizing the power grid in the US raises management problems to avoid loss and fraud in electricity and save money. manpower and costs.

Therefore, the team began to delve deeper into the application of quantum technology to increase the speed of computation, so that computers have to solve countless problems at the same time.

According to Professor Vu Van Tuyen (Clarkson University), scientists and many students in laboratories spent many months filtering simulation and experimental results, writing scripts to review the topic before a panel of independent experts. establish, or even completely change the approach.

“We had to exchange a lot to articulate three separate blocks of knowledge from the three research groups. Many days of meetings until late at night, sometimes even weekends to finalize the project outline” – Prof. Tu shared.

After many efforts, last August, a research project on the application of quantum computing and quantum networks to smart grid systems was awarded by NSF in the cooperation program with the US Department of Energy in 2022. The project is expected to take three years (2023 – 2026) for implementation.

The harmonious combination, the professionalism of the members plays a very important role to be able to implement and create the results of this project.

Opportunity to “take off” for Vietnamese intelligence

According to Professor Dinh Ngoc Thang (University of Virginia), many European countries and China have been investing a lot in quantum technology. Not only the US government, the world’s technology giants and the governments of many countries are spending billions of dollars on research into quantum technology to improve the capacity of power plants and energy centers.

“The quantum technology race is very hot. Vietnam once missed the opportunity to invest in blockchain (blockchain technology). This is the ideal time for us to join and master it,” Mr. Thang said.

Mr. Tu commented that it is the young generation of Vietnamese scientists who must join the “race” to research quantum technology right now. However, you must have a strong background in math, physics, especially computer science.

“Hard work and enthusiasm are not enough, it is necessary to cultivate soft skills and foreign languages ​​to avoid the story that many young people have very high average scores in university, but because of limited foreign languages, they miss the opportunity to work abroad. “, said Mr. Tu.

In addition, the application development of quantum technology is an inevitable trend that no country can stand aside. In particular, Vietnam is becoming a blockchain technology development center in the region and the world with “tech unicorns”.

In the US, professors have been accepting Vietnamese students and PhD students in security research and development, quantum computing optimization, blockchain and social networks, low-cost green energy serving society.

His research team has published more than 100 scientific papers at international conferences and leading journals. Professor Tu personally received many awards and chaired many projects sponsored by NSF, the US Department of Energy.

The lab’s research was funded by NSF, the US Department of Energy and several companies. His team has published more than 100 papers in professional conferences, and five of them have won top prizes.