Although it was pouring rain, teacher Nguyen Van Phuong stayed to read the entire opening speech, which moved many people.

On September 6, on social networking sites, the image of the principal standing in the rain gave a speech on the opening day. Underneath the schoolyard was empty, only a few students cleared their chairs and ran inside to shelter from the rain.

Many people who viewed the photos expressed their emotions and respect for the teacher who had devoted himself to despite heavy rain to complete the dignified opening ceremony. 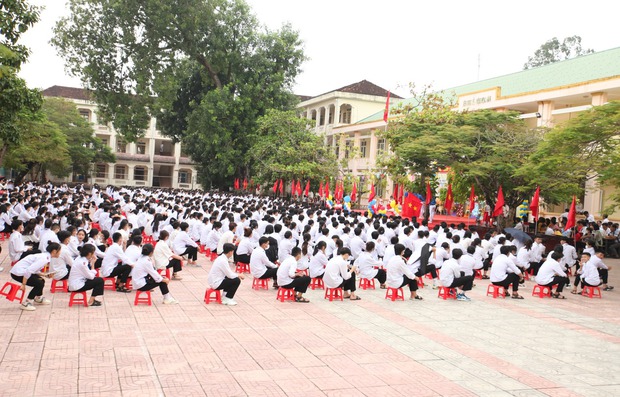 Through research and knowledge, this image took place at Nghi Loc 2 High School (Nghi My Commune, Nghi Loc, Nghe An). The person in the photo is teacher Nguyen Van Phuong, the school’s principal.

Sharing with PV, teacher Nguyen Van Phuong confirmed that he was the person in the photo. The incident took place in the morning of September 5, right on the opening ceremony of the school’s new school year 2022-2023.

Teacher Phuong shared more, before the opening day, the weather was beautiful and sunny. The school has carefully prepared for the opening ceremony such as decorating the stage, preparing the podium for the opening speech, cleaning the school clean and tidy. 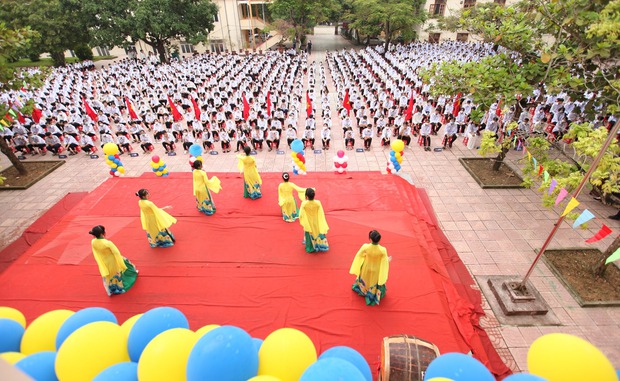 On the morning of September 5, the weather was beautiful, the opening ceremony took place normally. However, when Mr. Phuong read half of his opening speech, it suddenly started to rain. The rain was getting heavier and heavier. 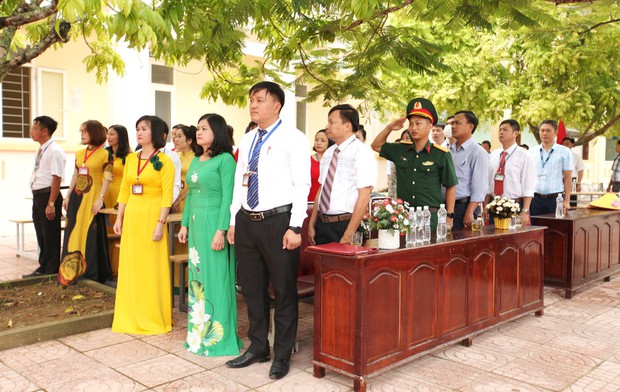 School leaders and delegates solemnly salute the flag at the opening ceremony.

After reading the opening speech, Mr. Phuong continued to beat the drum to open the new school year.

It is known that when it started to rain lightly, the students below took umbrellas. However, when the rain started to fall heavily, the teachers let the students take shelter from the rain in the classroom corridor to avoid getting wet.

Outside, the headmaster continued to finish the opening speech. Seeing the headmaster standing in the rain to give his speech, a student ran out to cover him with an umbrella.

“After 2 years due to the Covid-19 epidemic, it is now impossible to cancel the opening ceremony midway. I was halfway through the speech when it started to rain. The speech cannot be left unfinished, the opening drum cannot fail to score. On the other hand, there are thousands of students who, despite difficulties, must try to overcome them and want to send them that message. Students of the whole school are very excited and excited after hearing the opening of the school’s drum“, teacher Phuong shared. 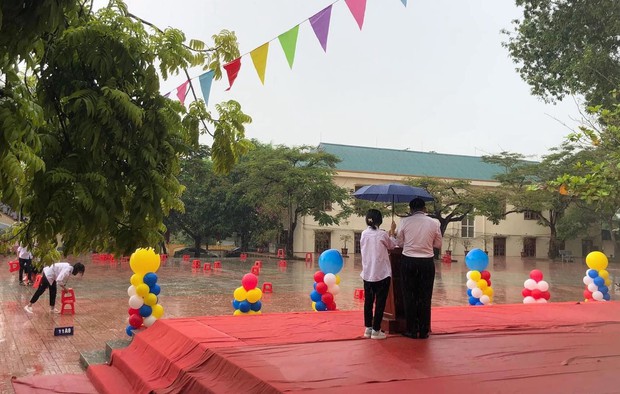 Halfway through the speech, it started to rain, but Mr. Phuong continued to stand in the rain to finish his speech. Seeing that, a student took an umbrella and ran to cover the teacher.

After hitting the opening drum, due to the rain, the opening ceremony continued in the indoor hall. “The ceremony was continued indoors with the rest. In which, the school has awarded 66 scholarships worth nearly 50 million VND to excellent and disadvantaged students to overcome difficulties in their studies.“, Mr. Phuong added.

The opening ceremony then continued to take place in the indoor hall.