This morning, August 30, the Hanoi People’s Court opened a trial for 10 defendants in the case of illegal drug trafficking and “flying” right in the Central Mental Hospital I (Hanoi). 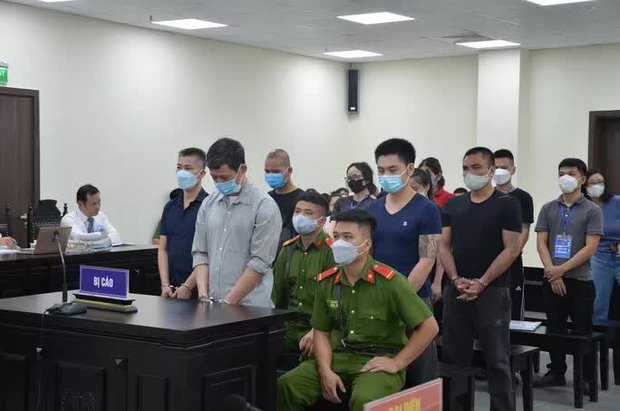 The defendants in the case were present at the trial

In this case, defendant Nguyen Xuan Quy (38 years old, residing in Thanh Tri district, Hanoi) was identified as the leader of the line, was prosecuted for 3 crimes of “illegal possession of narcotics”. , “Illegal trading in narcotics” and “Organizations that illegally use narcotics”.

Defendants Nguyen Van Ngoc and Nguyen Trung Nguyen were prosecuted for “illegal trading in narcotics” and “organizing illegal use of narcotics”.

According to the indictment, from 2018, Quy was subjected to compulsory medical treatment according to the decision of the People’s Procuracy of Thanh Tri district on the crime of illegal possession of narcotics. Accordingly, this defendant was treated at the 2nd floor room, Department of Rehabilitation and Traditional Medicine, Central Psychiatric Hospital I.

At the investigating agency, Quy said he did not have a mental illness, but took advantage of this to avoid serving the sentence. At the end of 2020, when the Rehabilitation Department moved to a new building, Quy was treated alone in the 2nd floor ward, without any patients. Taking advantage of the loopholes of faculty staff, Quy used his private key to freely bring strangers into this department to buy, sell, and organize drug use.

In addition, the 38-year-old defendant also designed his own room into 3 rooms, the outermost chamber for the treatment bed. The chamber in the middle of the quarter installs a large-capacity speaker system, an amplifier, a flash, a DJ table to “fly and shake”. In the innermost room, you put a bed and other items to rest and live. After the renovation was completed, Quy has organized many drug-using and flying parties here for visiting friends and relatives and some medical staff such as Vu, Hue, and Hat.

The People’s Procuracy determined that Quy and his accomplices had successfully organized 3 “drug parties” in this room. Typically, on the evening of 1-2-2021, Quy was invited by Hue to a birthday party in the staff room, next to Quy’s treatment place. After that, Quy thanked by lending Hue and friends a room to “fly around” to use drugs from 10 pm to 5 am the next morning. In addition, Hue, Ha, and Vu also went up to Quy’s room to ask for drugs to bring down to the music room of the department to use. In addition to the above accusations, the People’s Procuracy determined that Quy often traded drugs at the Central Mental Hospital I.

At the investigation agency, Quy claimed to buy drugs from an unknown person in Nghe An and was delivered to the treatment room. Receiving the goods, Quy and Ngoc divided them into boxes and hid them on the ceiling of the treatment room to avoid detection.

When customers buy drugs, Quy often takes them to the defendant’s private room to negotiate on quantity and price. The delivery boys will be paid by you by giving free drugs in the treatment room.

At the investigation agency, Nguyen Xuan Quy said that when the hospital room was renovated, the defendant Do Thi Luu knew and reminded and asked this “boss” to remove it, but Quy did not comply. Monthly pay to Dr. Luu from 6-10 million dong for the hospital room so that strangers and friends can enter Quy’s ward not according to the hospital’s regulations without being reminded. In addition, Quy also testified that he had been threatened by the head of the department, Luu, that he would comment on the medical records that he was in good health to serve his sentence and could not be treated at the department.

After receiving Quy’s money, Dr. Luu gave the union 2-3 million dong per month to fund the fund. The union leader wrote in detail the receipts, but then Ms. Liu directed to destroy all the books, so she could not remember each item.

During the investigation, defendant Luu Khai Quarter 4 congratulated the faculty with a total amount of VND 8.5 million. Regarding Quy’s self-renovation of the ward, defendant Luu heard the staff’s complaints and reminded him, but Quy did not do so. The former head of the Department of Rehabilitation and Traditional Medicine also denied collecting Quy’s monthly room fee.

In addition to her act of covering up for Quy, the police determined that Ms. Liu also used her position as head of the department to illegally collect and receive money from patients and their family members. Defendant Luu also approved the trade union fund to distribute to each officer and employee in the department an average of 600,000 VND per month. Receiving money, defendant Luu divided the money among 38 officials in about 24 months for a total of 384 million VND.