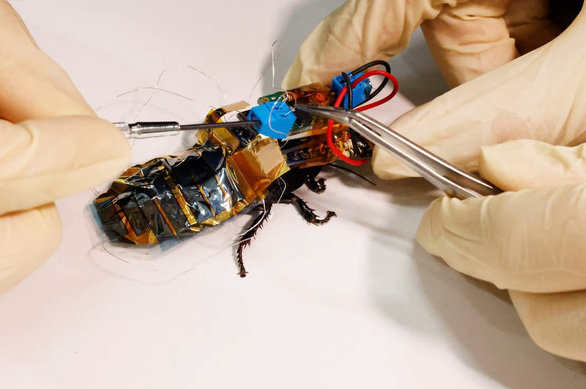 A researcher attaches solar cells to a backpack containing electronics on the back of Madagascar cockroaches in a laboratory in Saitama Prefecture, Japan – Photo: REUTERS

Researcher Fukuda Kenjiro and his team at the Riken Research Institute have developed a flexible solar film just 4 micrometers thick (about 1/25 the thickness of a human hair), and can fit on the back of a cockroach. , according to Reuters news agency on September 22.

The team demonstrated the ability to attach the aforementioned backpack to cockroaches and control their movements with a remote control. The film allows the cockroach to move freely while the solar cell provides enough power to process and send direction signals to the sensory organs on the animal’s hind legs.

“The battery in the robot runs out very quickly, so the search time will be shorter. A key benefit of cyborg insects is that they can move on their own, so they use much less electricity,” said Mr. Fukuda.

The team chose Madagascar cockroaches for the experiment because they are large enough to carry the device and have no wings, which can interfere with movement. Even with the film and backpack taped to the back, cockroaches can still overcome small obstacles or flip back when flipped upside down during travel.

However, the research still has a long way to go. In a recent experiment, researcher Yujiro Kakei, from Riken, used special computers and wireless Bluetooth signals to give commands to cockroaches. The animal turned left on command, but turned around when asked to turn right.

The next challenge is to shrink the devices even further to make it easier for the cockroaches to move, and to allow the team to add sensors and even cameras. Mr. Kakei said he built the backpack containing the equipment with a total value of 5,000 yen ($35).

The film and backpack can be removed from the cockroach’s back, allowing them to rest after hours of searching for victims in earthquakes. The cockroaches mature within 4 months and can live up to 5 years in captivity.